At NBN Co, we’re not just building a network for the future of Australia’s broadband needs. We’re also building careers and helping a new generation of technicians and engineers learn the skills to operate, maintain and repair this vast piece of national infrastructure.

To this end, 13 bright, dedicated and hardworking trainees have just completed NBN Co’s first-ever traineeship program: a rigorous course focused on theory and practical work, designed to train the next generation of field techs.

Meet Graeme, Ben and Jeff, three of our Trainee Field Technicians, and find out more about their journey into an exciting career:

“To be honest, it’s been one of the best decisions I’ve ever made,” says Graeme Searle, one of the trainees who beat a national field of more than 1500 applicants to snare one of the inaugural traineeships.

Searle, alongside his fellow trainees, has just finished the program and has now been offered full-time employment with NBN Co.

“The whole thing started with me sitting at a computer searching for ‘apprenticeship, telecommunications, technical role’ and up popped the NBN Co traineeships."

“I had done previous electronics and IT-related studies at TAFE and uni...I knew I had an instinct for the technical, and somewhat of an engineering flair, but I just didn’t know where to focus that.

“I’m just thankful I clicked on that link because it’s been one of the best decisions I’ve ever made. I’ve never had more fun at work ever.”

The 13 trainees involved in the program hail from all corners of Australia with three coming from Melbourne, three from Sydney, three from Adelaide, two from Brisbane and two from Perth.

Aged from 18 to 32, they also come from different backgrounds of life with some having completed TAFE qualifications while others have come to the industry as complete newbies. 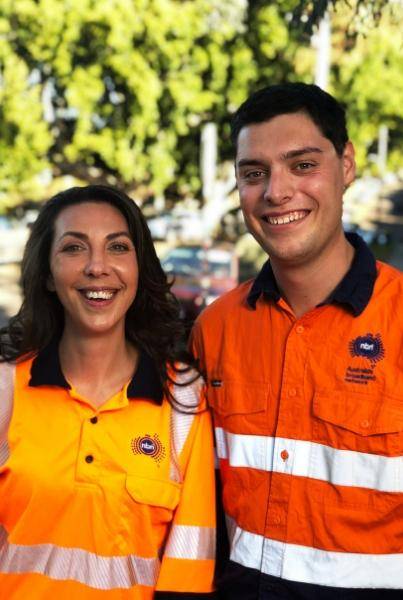 For another member of the inaugural batch of trainees, 23-year-old Ben Doran from Brisbane, the decision to pursue a career with NBN Co came after taking a break from a previous stint in the telecommunications industry.

After finishing high school, Doran worked on building private Fibre-to-the-Premises networks with a telecommunications company before heading overseas to the UK where he spent 18 months working in hotel and bar management.

Having decided to move back to sunny Brisbane, Doran wanted to rekindle his career in telecommunications.

“I loved working in the telco industry. I just realised it wasn’t the right time for me when I was younger. So when I saw the NBN Co traineeship opportunity, I jumped at it.”

Doran describes the interview process to secure one of the coveted apprenticeships as “gruelling”.

“I’ve never been more nervous in my life. There were three separate interviews with the final one being in front of a three-person panel. I studied for two weeks straight leading into it because I really wanted the job and I managed to be lucky enough to be one of the chosen few.”

For Doran – and, indeed, his fellow trainees – taking on this modern apprenticeship has been about building a lifelong career, contributing to one of Australia’s largest ever infrastructure projects, and being a part of something that is bigger than himself. 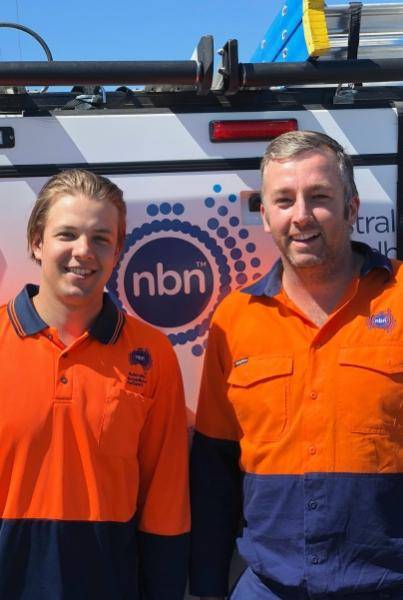 “It’s the future of Australian telecommunications. It’s a new network with the latest technology but, more important than that, it’s a project that will change how many Australians interact with the internet,” says Doran.

“Also, the work is super interesting. As trainees, we are never sitting down looking at the same issues every day. We’re out and about fixing the network, helping the customers. It’s a really satisfying job.”

Searle, on the other hand, wanted to pursue the NBN Co traineeship for the role’s focus on technical and engineering work.

“This traineeship is that and so much more. Because the nbn™ access network is built on so many technologies, you have to figure out how they interact with each other. That’s not only really challenging, it’s really cool.”

NBN Co’s Field Technician Traineeship Program was launched in March 2017. The program is split between theory (the TAFE certificate components) and stints in the field working with coaches to learn the ins and outs of the various elements that make up the nbn™ access network.

“Every day is so different,” says Searle. “One day, you will be on the street fixing a fibre fault and the next day you will be in an exchange sorting a core network issue out, upgrading things and learning how this network actually all works together.”

This split between field work and study – which includes the completion of Certificate III and Certificate IV of Telecommunications from TAFE – was well received by the trainees. “It’s been structured really well,” says 23-year-old Perth trainee Jeffrey Carter. “There’s been lots of support from the business, the program teachers, as well as all the field coaches who are out there teaching us the day-to-day action. 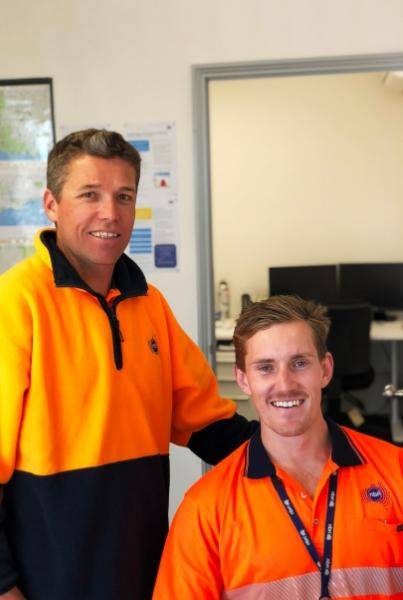 “But, most of all, it’s just been great to get out in the field and see how this network is put together and [how it] works.

“I came in with no telco experience, so I had no idea how [the various parts of the network] all interacted together. Now I’ve been through copper faults, laser safety, and plenty of node and pillar checks. I’ve even replaced an entire node chassis with my mentors.”

One of the group’s mentors, field engineer Sean Powell, says being part of the program has been a fantastic experience for all involved.

“It’s great that the company is thinking about the next generation and giving something back in the form of these apprenticeships. Getting in ‘young blood’ and training them within the telco industry for NBN Co standards will make a big difference to the quality of work we perform and guarantee some solid experience for decades to come.

“But it’s not just about us field coaches lending our experience and knowledge: we are also learning a lot from these young trainees. Having fresh eyes on the job and seeing things from a different perspective is actually helping us learn, too. It’s been tremendously rewarding.”

Wade Campbell, General Manager of Customer Field Services at NBN Co – and the sponsor of the traineeship program – describes the progress of this cohort of trainees as “outstanding”.

“The trainee program has been an overwhelming success, not only for the trainees but for their mentors as well.

“For me, one of the most pleasing aspects is observing the bond that has been created between the highly experienced mentors and those just embarking upon what I hope is a long-term career in telecommunications.”

The company’s second intake of trainees is now open and accepting applications.