When it comes to rolling out the nbn™ broadband access network, there are many different ways to do it.

From hauling fibre through tunnels beneath Melbourne’s CBD, to boring beneath railway lines, and stringing cables across fast-flowing rivers via aerial drone.

With more than half the build complete nationwide, it’s not too often that we’re faced with something relatively new.

Yet that’s the situation faced in the Gippsland region of Victoria, where we needed to plough a 13-kilometre stretch of rolling farmland to ‘direct bury’ fibre.

This uncommon construction method for NBN Co was adopted between the sleepy towns of Leongatha and Korumburra, about 135 kilometres south-east of Melbourne.

The Direct Fibre Network (DFN) will link the Local Fibre Network (LFN) in both towns – which is Fibre-to-the-Node (FTTN) – that runs from the exchange in Leongatha. It’s the first time NBN Co has used the direct bury method to roll out fibre in Victoria. 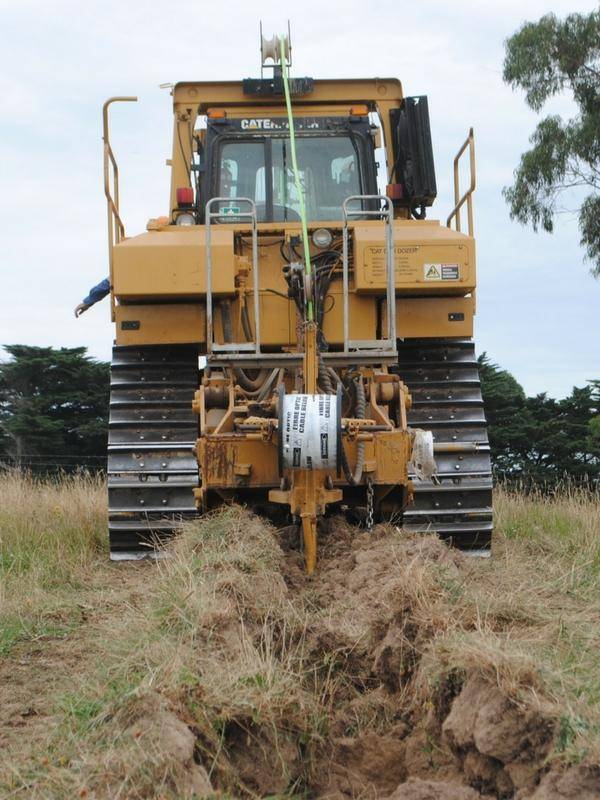 Why the solution was necessary

Several factors including cost, distance and complexity stopped the team on the ground from adopting a more traditional ‘duct-and-cable’ solution.

Because there was no existing duct in the area for NBN Co to use, NBN Co investigated a direct bury approach. This saved almost half the cost associated with boring and installing ducting along the route.

A special plough machine was used to dig the extremely long trench that crosses multiple properties, ranging from farms to vineyards, which meant stakeholder management was particularly important for this project. 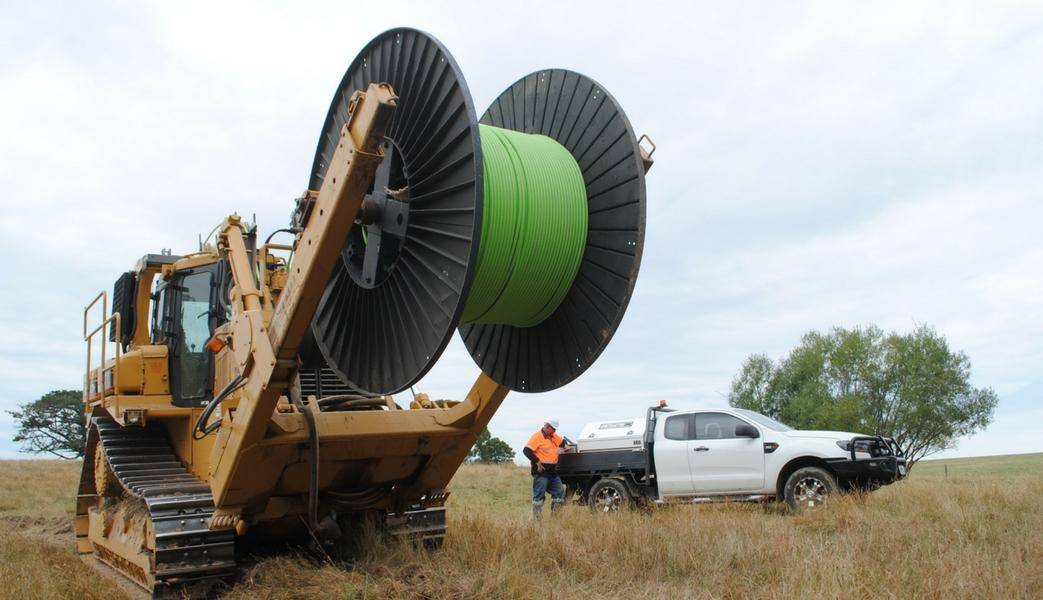 While installing direct buried cables in the past may have been simpler, NBN Co Project Manager – Victoria Regional Deployment Vaia Variamis says the landscape has changed considerably over the years, with much more development now in place.

“With direct buries, you need to use a ploughing method and, historically when decisions were made not to install ducts it wouldn’t have been such a built-up area. Ploughing is usually done in long stretches of farmland where you don’t have much infrastructure; there are no shopfronts and so on.

“But, obviously, as things have progressed, Leongatha is now more developed. So, in a lot of these areas, it’s a little bit tricky to direct bury with a plough machine because we have new infrastructure in place.”


A special plough machine was used to dig the extremely long trench that crosses multiple properties, ranging from farms to vineyards, which meant stakeholder management was particularly important...

While we made the decision to follow a direct bury approach, there were still other complexities to be managed.

“There are certain areas we can’t put a plough machine through, so we haul fibre through those sections,” says Variamis.

Progress can also be painfully slow, which Variamis explained prior to the commencement of the project.

“There’s going to be a lot of transition points where we plough, stop and bore, and that takes a lot of time.”

Additionally, the materials were custom-made to order, resulting in a 12 to 16-week lead time.

“It’s loose-tube fibre so, because it’s direct buried, there are also complexities around splicing the loose-tube to the ribbon,” explains Variamis. 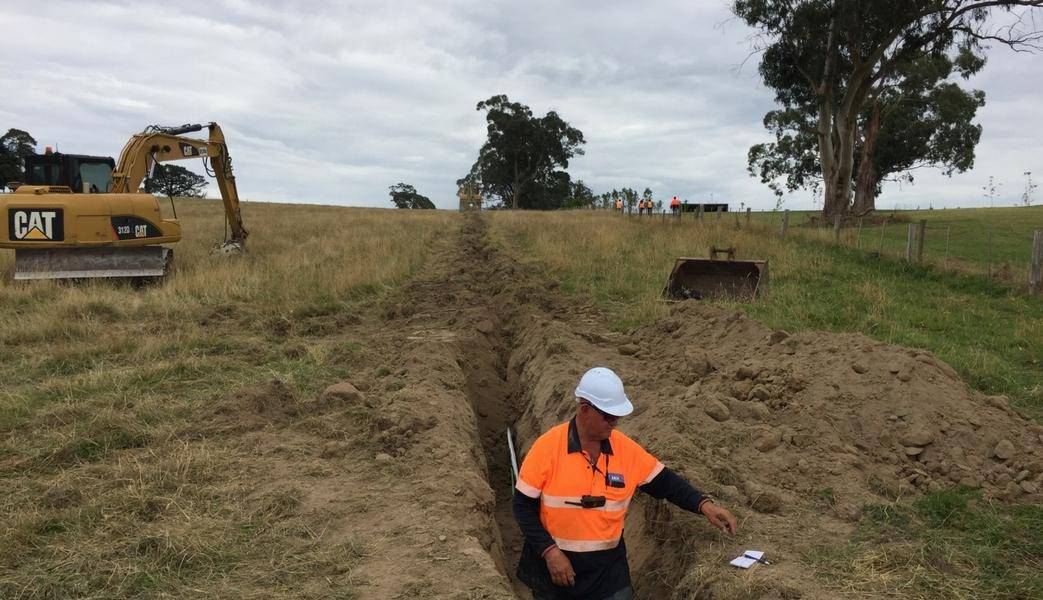 Essentially, this means more time added. “As we come through, if we need to splice loose-tube into a ribbon, it’s a lot more time-consuming,” says Variamis. “It’s all about linking.”

Another complexity with using the plough machine is that there’s infrastructure NBN Co needs to be careful not to break, ranging from utility assets, existing copper cables and farmland irrigation systems.

Then there are inquisitive cows that need to be kept away from the action as fences are cut through.

“There’s a lot of open farmland and farmers have put in their own irrigation systems that are not on the ‘Dial Before You Dig’ register, so we were at risk of ploughing through those,” says Variamis.

“We also need the right crews there to be able to repair those assets if something happens.

“The good news is the subcontractor that our Delivery Partner Service Stream engaged has a lot of experience doing this and they’ve also got key contacts that can repair these assets.”

It’s not just the specialist plough machine that was employed to get the job done, either.

An excavator was on hand to gouge-out rocks encountered beneath the surface before trench digging could continue, along with a 35-tonne rolling machine to compact the trench once the fibre was laid in the ground.

He was recently in Leongatha to lend his considerable advice and expertise to get the job done. 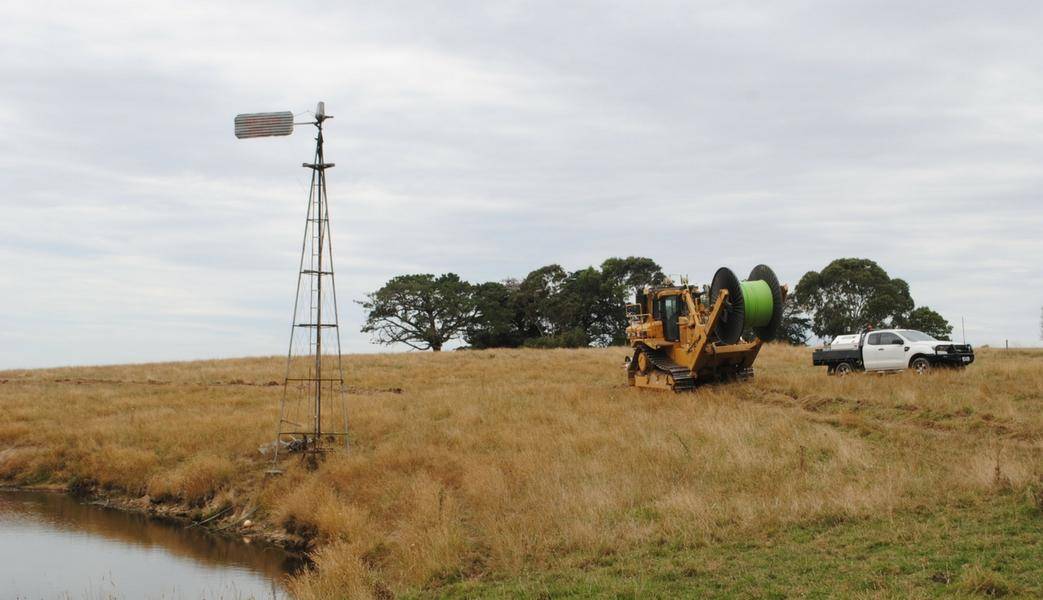 “My job on the plough at Telstra was to splice the cable as well as pull down fences, go ahead and mark out the path where the plough would be going,” says Bailey.

According to Bailey, the types of challenges in these situations remain the same.

“Just as we saw here in Leongatha, you can have rocks that are sometimes so big you have to get rock saws in to cut them and break them apart.

With the direct buried fibre project now complete, Korumburra in the Gippsland region is on track to be connected to services over the nbn™ access network by the end of June 2018.

Discover how we connected Belgrave at the foot of the Dandenong Ranges in Melbourne's leafy outer east.