When most Melburnians walk past iconic structures – such as the Melbourne Cricket Ground (MCG), State Library Victoria (SLV) and St Paul’s Cathedral – thoughts of history, grandeur and pride likely spring to mind.

Yet, for Biju John, NBN Co Project Manager – Regional Deployment, his first consideration is more akin to, ‘How do we get them connected?’

Architectural and cultural wonders they may be but, like much of what we’ve faced ramping up the rollout of the nbn™ broadband access network in metro areas this year, they each present their own unique set of challenges.

No one knows this better than Gavin Davies.

As Stakeholder Manager with NBN Co construction partner Decon Technologies, Davies and his team are at the pointy end of working out the best way to bring these major buildings into the nbn™ access network fold.

From restricted access due to high-profile AFL matches or international concerts, to noise mitigation, heritage-protection issues and century-old infrastructure, each job can be a broadband adventure in its own right.

“We’re connecting buildings all over the city, from the smallest Flinders Lane cafe to huge office towers, and every one is different,” says Davies.

These buildings include one of the nation’s most hallowed sporting landmarks: the MCG.

Built in 1856, this world-famous arena has witnessed some of the most magical moments in sport during its 162-year history.

They range from the very first test cricket match in 1877, to the heart-stopping VFL Grand Final draw between Collingwood Football Club and North Melbourne Football Club exactly a century later and playing host to the 1956 Olympic Games.

Such is its place in the lexicon of sport that the MCG is also home to the National Sports Museum.

With such a rich sporting and cultural history under its belt, the stadium is now embracing the future with a connection to fast broadband via services over the nbn™ access network.

This means back-of-house functions ranging from MCG administration staff to the box office, catering, media and emergency services are able to connect to the nbn™ access network via Fibre-to-the-Basement (FTTB) technology. 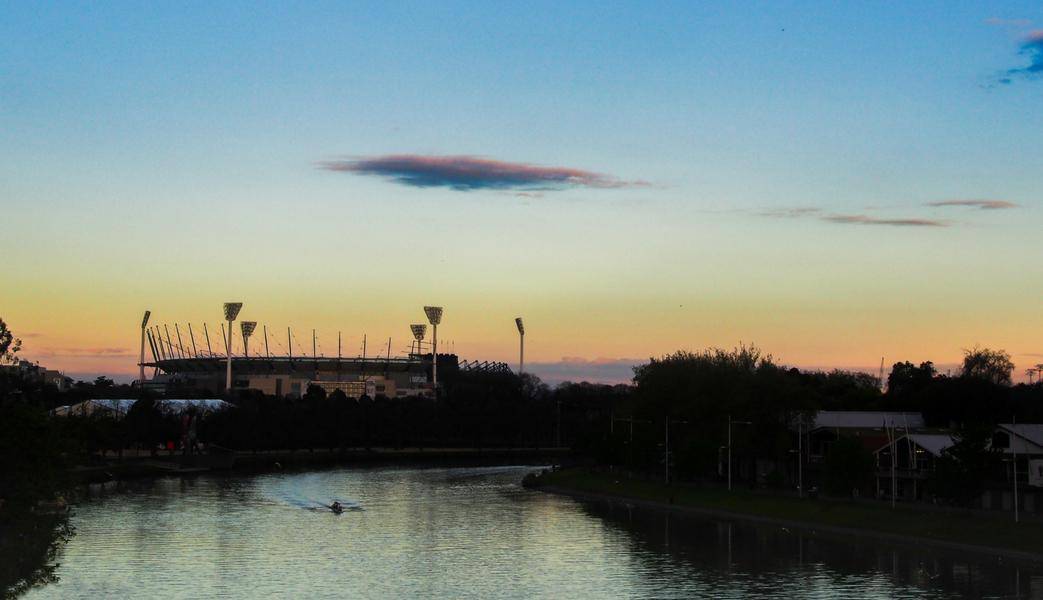 As with other heritage sites on our network, like the University of Melbourne, the home of football’s storied past presented challenges.

Five months of detailed design planning and negotiation with multiple stakeholders – including Parks Victoria, the MCC Trust, Heritage Victoria, Telstra and the City of Melbourne – was required before any actual construction work could begin.

John says a key to satisfying all concerned was ensuring that the team clearly explained what it intended to do.

“The build itself wasn’t too challenging; it was just getting access and the required permissions to go and do the site survey.

“They [stakeholders] were concerned about what sort of equipment we would install, whether it would stand out, and if there would be cables visible inside and outside the building.

“Once it was all revealed to them though, they were very supportive.” 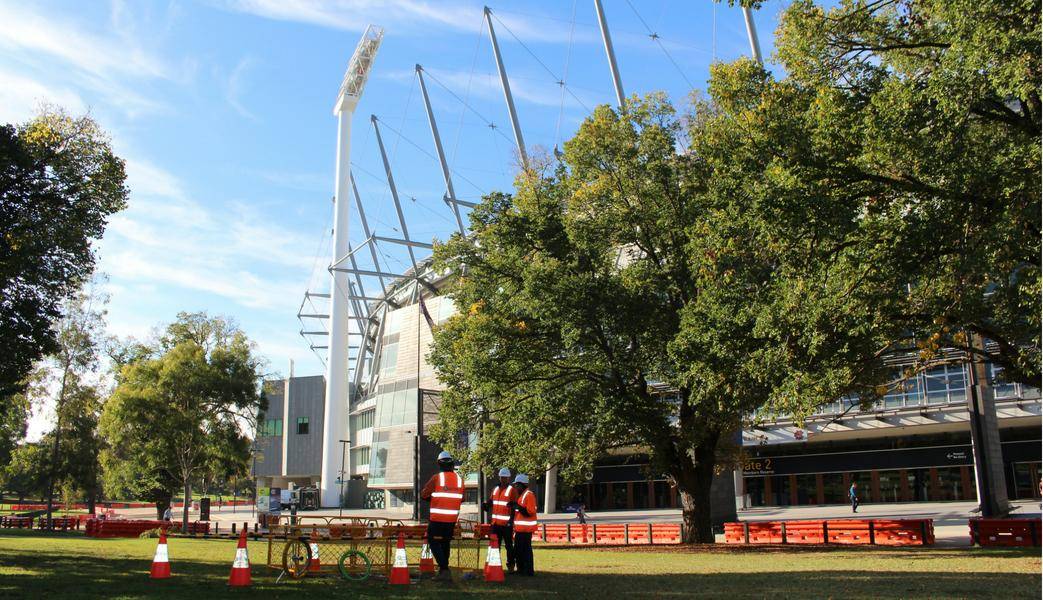 Davies adds that the City of Melbourne has a strong policy of not having infrastructure above-ground in any of their parks.

“We had to augment our design to make it work to make sure we fit in.”

Davies says two of the hardest constraints that had to be worked through were relocating a nearby node outside the MCG, then powering it from another source.

Further complicating matters was the fact that no work could be carried out while there were AFL games in progress at the ground, such as on Friday nights.

As the statues of sporting greats looked on – including Richmond Football Club’s AFL champion Kevin Bartlett and one of Australia’s greatest ever left-handed cricket batters Neil Harvey – installers from Decon recently hauled cable through existing conduit via a maintenance hole located in parkland surrounding the MCG. 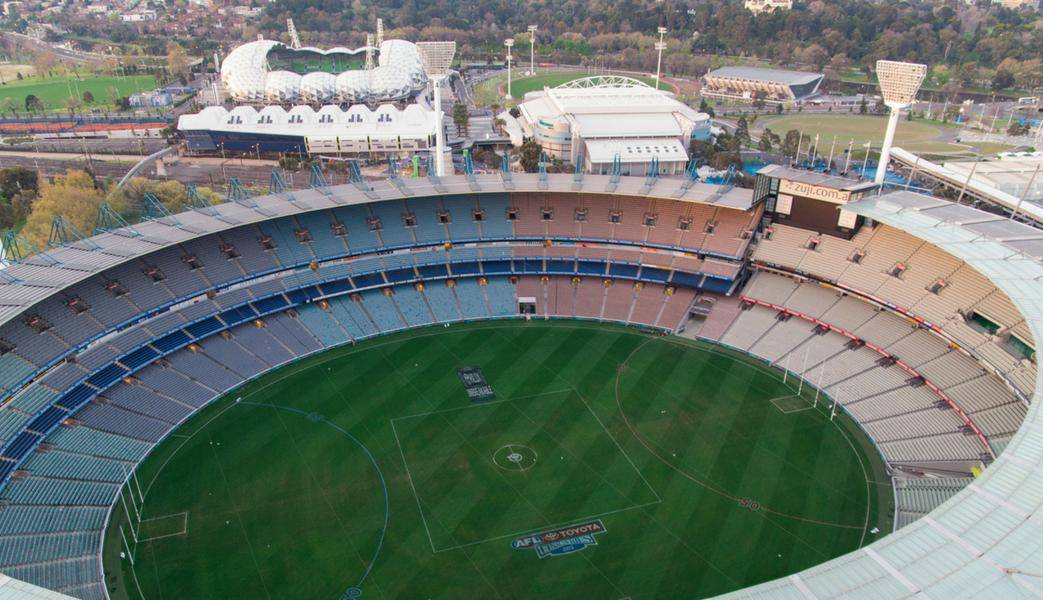 They then worked closely with the Melbourne Cricket Club’s engineering and IT department staff on site to complete the install inside the stadium itself.

Davies says it was a proud moment connecting such an iconic Melbourne institution to the nbn™ access network.

“As any construction company can attest to, it’s always a challenge to complete a project like this at the MCG during the busy AFL season.

“Decon Technologies is very proud to be performing these activities in the city at sites like the MCG, where building relationships with stakeholders has been key to cabling these iconic buildings.”

Other such icons include the SLV. 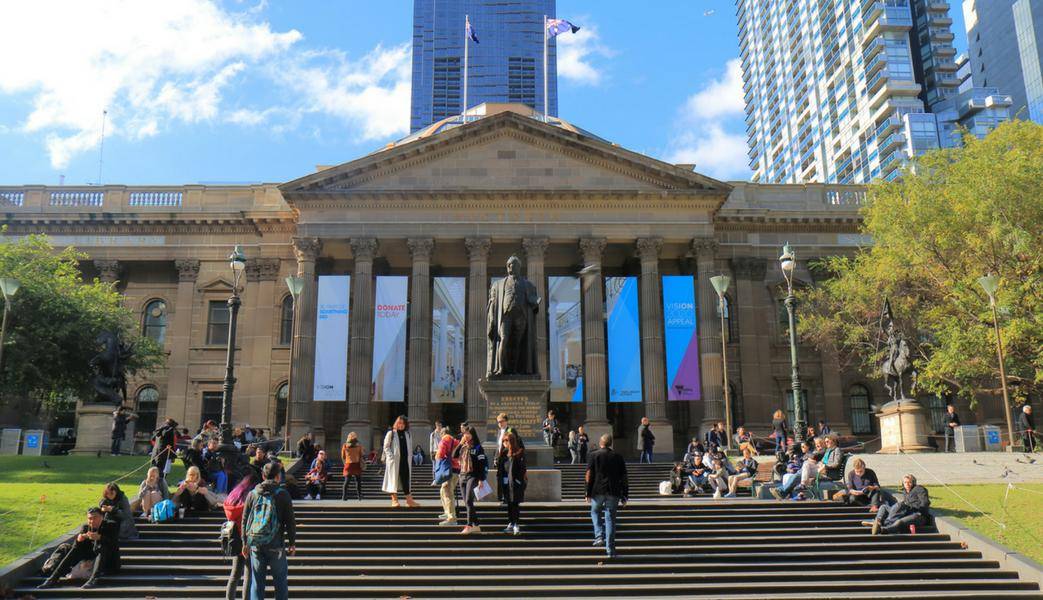 Established in 1854, the SLV is Australia’s oldest public library and one of the first free public libraries in the world.

With its neoclassical columns, the ‘Grand Old Dame’ dominates the corner of Swanston and Latrobe Streets in the heart of Australia’s fastest growing city.

Davies says one of the first challenges to overcome was simply gaining access.

“One of the hardest things about this site, in particular, was that they [stakeholders] have a very stringent induction process, so it took a lot of input from a lot of segments and businesses to get that done.”

On top of inductions, SLV also made it clear that someone would escort construction crews at all times because they would be entering areas where sensitive historic records are stored.

“They don’t let just any contractor come in and they don’t make it easy for you to come, but once we got that sorted out, it was fine,” says Davies.

NBN Co Project Officer Shane Butler adds, not only is SLV a large, Heritage-listed structure, it was also undergoing a communications room reshuffle at the time of the nbn™ access network install.

Careful coordination with the library’s property manager and technology services operations manager was necessary to ensure a minimal-impact installation in the depths of the building. 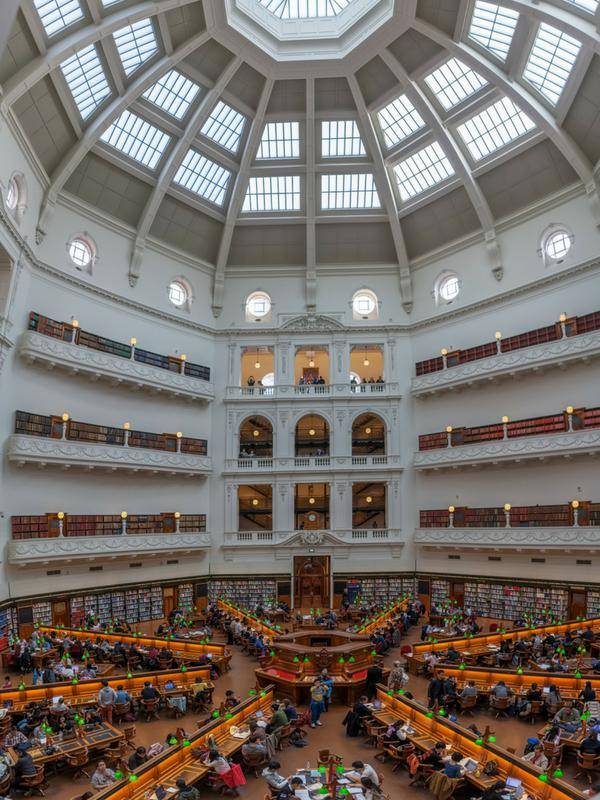 “It was as if it were snaking its way through ancient catacombs!” 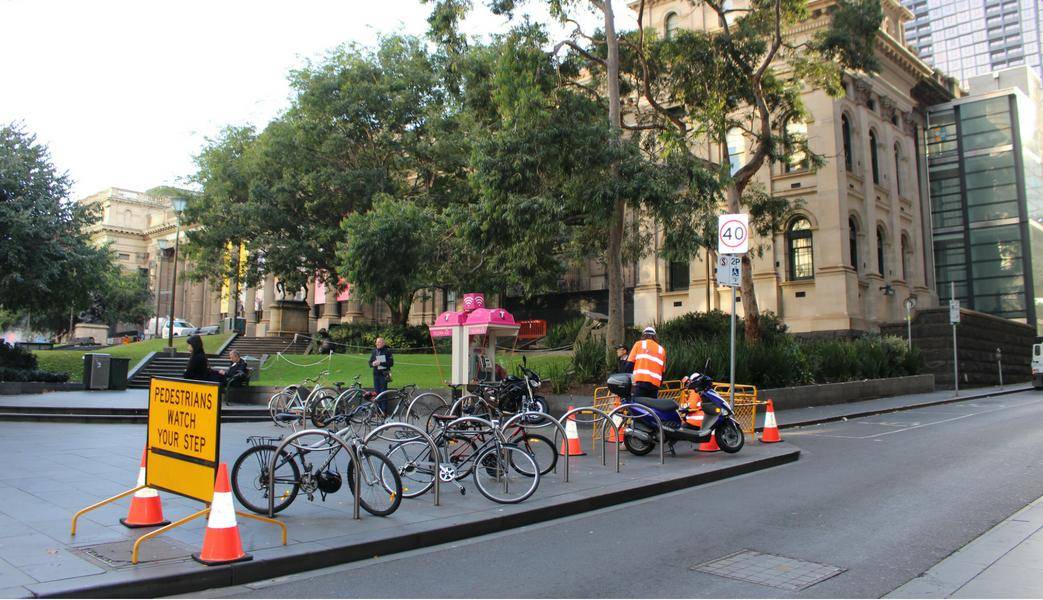 There were also issues with power and heritage that had to be managed.

“We did come across a heritage issue where we had to basically get a new design for the power,” explains Davies.

“So we did that as part of design optimisation where we met up with SLV and came up with an acceptable solution for everyone.” 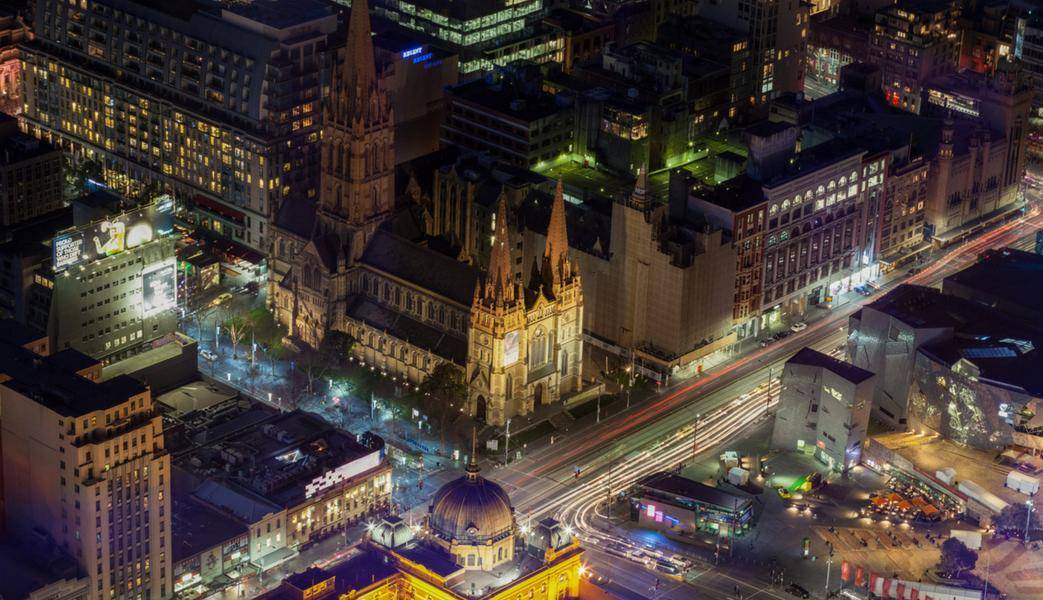 With its 95-metre-tall spire and prominent location at one of the busiest intersections in the country – populated by Flinders Street Station, Federation Square and the Young & Jackson hotel (home to the famous Chloé painting) – St Paul’s Cathedral is one of Melbourne’s most recognisable architectural landmarks.

The neo-Gothic transitional-style cathedral occupies the spot where Melbourne’s first Christian service was held in 1836.

“Thankfully, the structure is fed from a lead-in at the rear of the building on Flinders Lane, away from the car, tram and pedestrian traffic of the intersection,” says Butler.

“With a foundation stone that was first laid in 1880, this is obviously a Heritage-listed building and, as such, it was fortunate that there were some existing cable trays, and space in the wall cavities, to run the nbn™ internal access network cabling.”

While of interest to historians and church-goers, the building’s 19th century heritage posed a challenge that no one really saw coming: noise pollution.

“One of the fascinating things about connecting many of these old buildings is getting to look inside places most people rarely get to go,” said Davies.

“While the build itself at St Paul’s went very smoothly, there are some really cavernous spaces in the bowels of the building, and they [stakeholders] were quite concerned that any noise coming from the communications room didn’t increase and ruin the ambience once our work was done.”

Sound was also an issue when it came to connecting Rod Laver Arena, albeit in a very different way to St Paul’s. 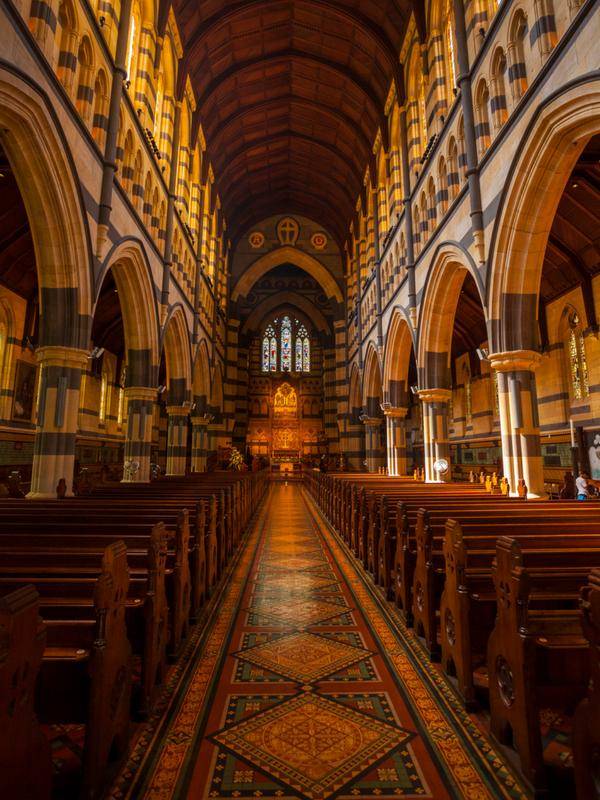 High-profile concerts regularly housed in the Melbourne & Olympic Parks precinct, which the Australian Open tennis championships also calls home, meant there was only a small window of opportunity to carry out the work necessary to connect world-famous Rod Laver Arena to the nbn™ access network.

While Butler notes the relatively new building didn’t present many obstacles in terms of cable runs and cabinet installation, the main challenge was access and timing.

“Construction teams needed to be fully inducted to access the site.

“The works then had to be carefully planned around concerts and sporting events. It’s not like you can simply set up some barricades and some cones among 15,000 people!”

Complicating this was the need to time the installation of an nbn™ node to coincide with a major VicRoads road-widening project, to ensure they were in sync.

“It would cost VicRoads a huge amount of money to relocate services that we put in, considering the road widening project is occurring at the same time as we were there,” explains Davies.

“So we worked in conjunction with VicRoads to time our works so that everyone gets in and it doesn’t end up costing a whole lot of money and impacting on the design.” 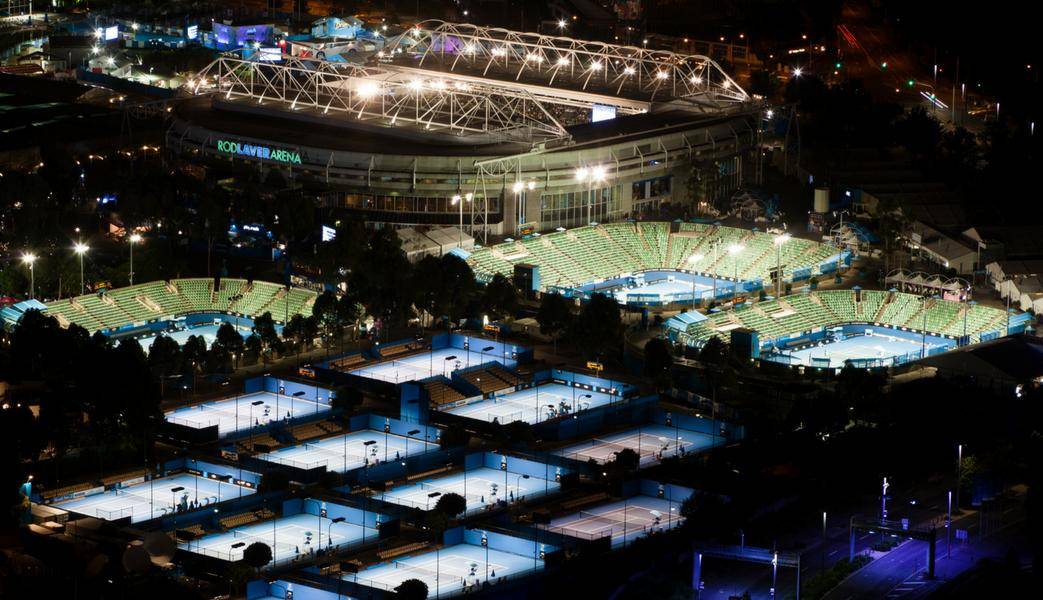 Even before reaching this stage, though, there were other rivers to cross.

“As the cable run came up to this particular node, which we had to relocate, we came across an intersection that’s a major pedestrian crossing in between the courts near the main entrance,” says Davies.

“We had to get in and get that done in a very tight time frame in between two major concerts: Sia and Paul McCartney.

“There was a lot of consultation with Rod Laver Arena and the relevant stakeholders to time our works so we could get a two-day civil job done in just a few hours so there’d be no issues with the pedestrian traffic.”

Crews began working at 5am in the knowledge they were racing against the clock.

“There was a lot of coordination to get that working with the events occurring at the stadium,” says Davies.

“We had to get it done by a certain time and there was a lot of traffic flow going through this area, so temporary reinstatement had to be done straight away. We had to make sure there were no trip hazards and everything was safe.” 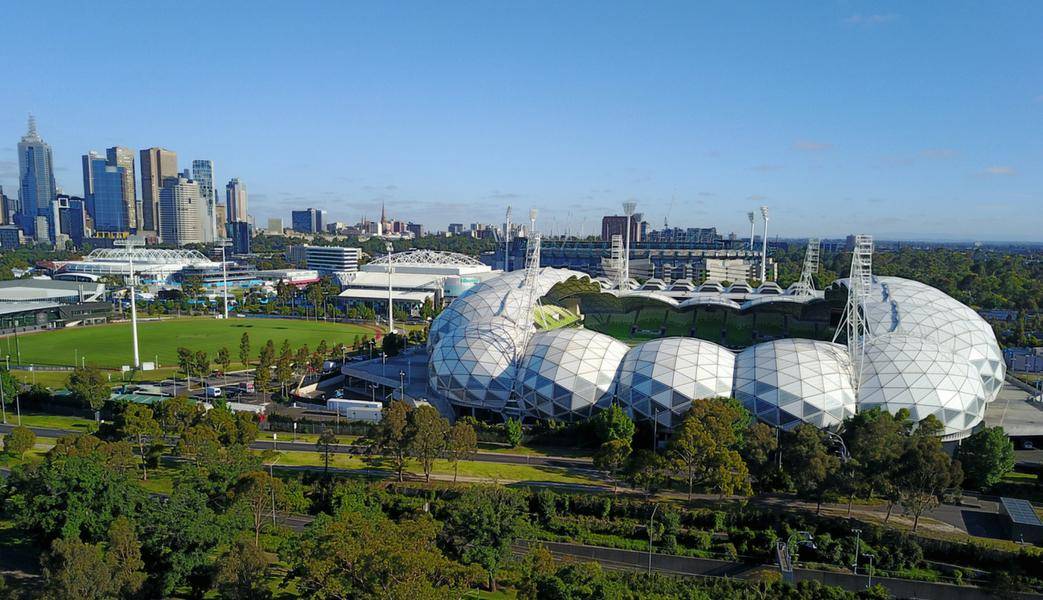 Like all such projects, having a good relationship with stakeholders allows an already tricky process to proceed much smoother than it otherwise might.

“We were able to bounce off that relationship and the good work we did with the lead-in between the concerts to do our FTTB build within Rod Laver Arena with relative ease,” says Davies.

Decon Technologies Project Manager Matt Vinar adds that the significance of connecting such iconic buildings was not lost on him and his construction crews.

“It’s an achievement to be able to work on these buildings for NBN Co and we always take a minute to stop and appreciate the surroundings, especially with these heritage sites.”

Discover how we overcame rollout challenges in remote Western Australia.