By: Jennifer Kiely | The nbn™ project | Published on 8 November 2019
Share on Twitter Share on Facebook Share on LinkedIn
With 150 or so ‘Big Things’ dotted around Australia, we shine a (tall) spotlight on those looming large in nbn™ ready-to-connect towns, suburbs and cities.
It’s (well and truly) the biggest state in Australia by land mass so it seems only fitting that we head way out west for the second leg of our ‘Big Things’ road trip.

But, first, a BIG recap

The first leg of our journey to visit Australia’s famous oversized sculptures in nbn™ ready-to-connect towns, suburbs and cities saw us navigating around New South Wales.

Starting with The Big Golden Guitar in Tamworth, we then flew the coop to The Big Chook in Moonbi, hit Barellan for a gander at The Big Tennis Racquet, before finishing up at the catch of the day: The Big Trout in Adaminaby.

Spanning a whopping 2.5 million square kilometres, Western Australia (WA) is not only Australia’s largest state, it’s also one of the largest states anywhere in the world.

Home to 2.6 million people – that’s just over one person per square kilometre – WA is among Mother Nature’s finest mixes of beautiful beaches, stunning outback and expanses of lush green. 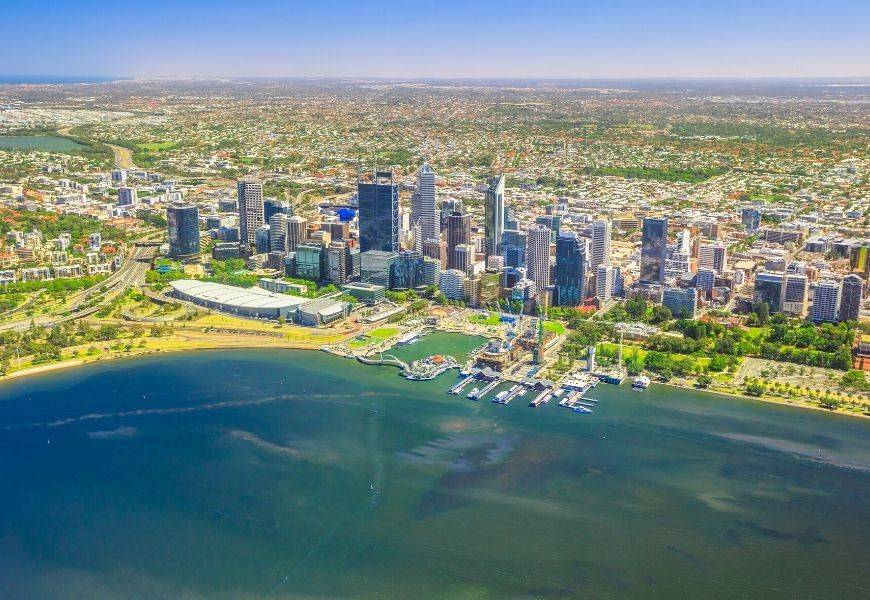 Setting out from Perth, the country’s most westerly capital city, we take the Graham Farmer Freeway (named for Australian Football Hall of Fame Legend ‘Polly’ Farmer), and on to the Great Eastern Highway to wind our way out of town.

Continuing northeast for just shy of two hours, or 141 klicks, we pass an abundance of national parks, nature reserves and state forests – including the first of its kind in WA, the John Forrest National Park, proclaimed in 1900 – before our destination comes into focus: The Big Camera. 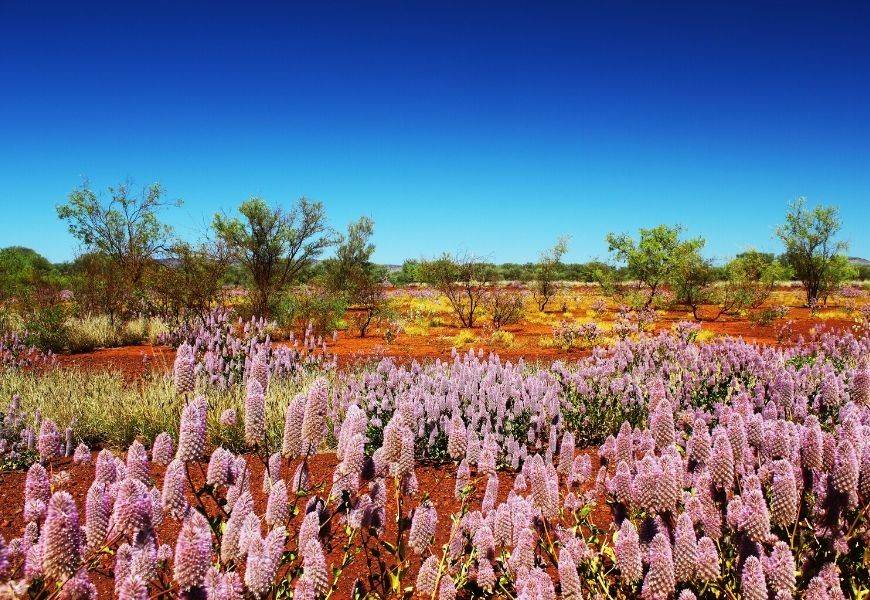 Situated on the Great Eastern Highway in Meckering, it’s hard to miss The Big Camera as you head into town.

And it’s not just any BIG Camera – it’s also a connected BIG Camera! 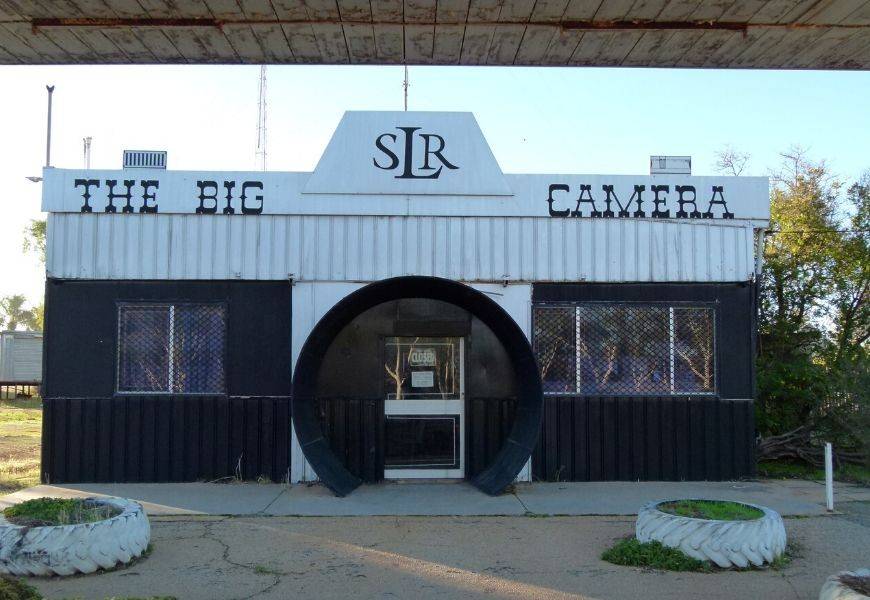 That’d be one B-I-G selfie! Image: Photographs of Perth

Not only is it one of Australia’s impressive Big Things from the outside, there’s plenty to discover inside too, with the colossal camera doubling as a photography museum.

Starting out life as a service station, the building was constructed in the early 1970s after the Meckering Earthquake rocked the now 236 people-strong town.

Hang on a minute – an earthquake, you say? Yes, but more on that in a minute.

Fast forward to 1995 and the now-vacant building was snapped up by Charles ‘Chic’ Wadley, a passionate camera collector.

“I started The Big Camera as a hobby to keep me occupied – now, it’s more like an obsession.”

To pay homage to a 35mm SLR camera, Chic – today, a retired electronics engineer – altered the front of the building to attract attention. And it obviously worked: it’s also now the information centre for all of Meckering.

Meckering is ready to connect to services over the nbn™ access network. Check your address to find out if it’s available at your home or business.
Address
Enter an address and select from the dropdown options 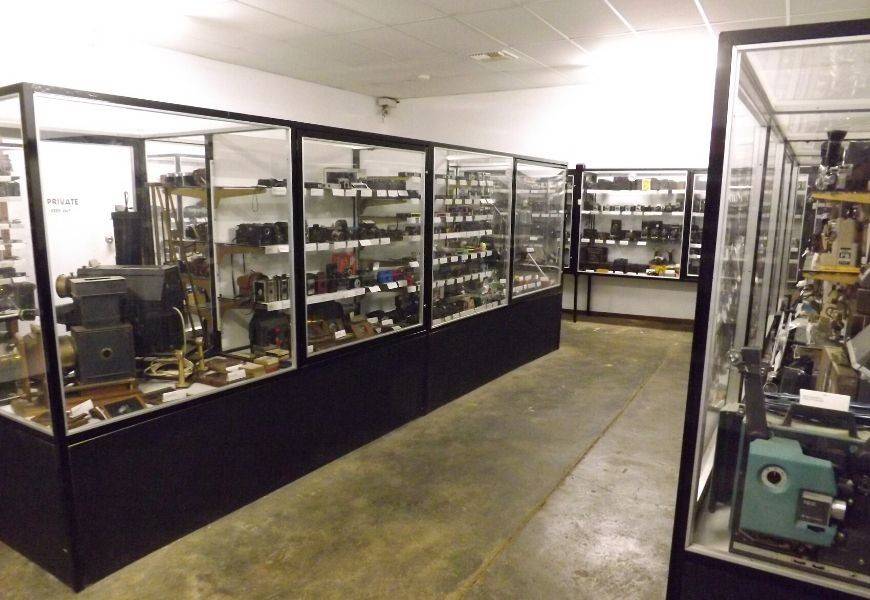 Image thanks to The Big Camera.

Stepping through the giant lens is like entering a photography lover’s dream.

Dedicated to all things photography, it features the nearly 3000 cameras Chic has collected, repaired and restored over the years.

“The cameras start from eight years before photography was invented, up to modern day equipment – only film or glass plate not digital,” says Chic. 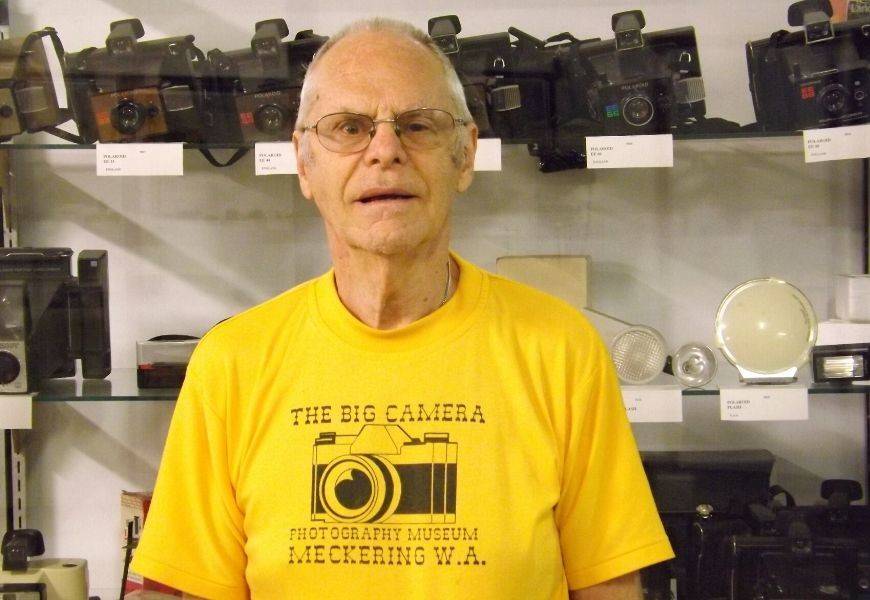 Say 'Chic'. Image thanks to The Big Camera.

“I still purchase cameras but also get cameras donated to the museum from all over the world,” says Chic, “as people know that the cameras will be restored and put on display, so I am still adding to it.”

While Chic may not have any digital cameras in his collection, The Big Camera itself is online.

“My nbn™ [access network] connection is via the Sky Muster™ satellite [service]. I am very happy with it and use it every day.”* 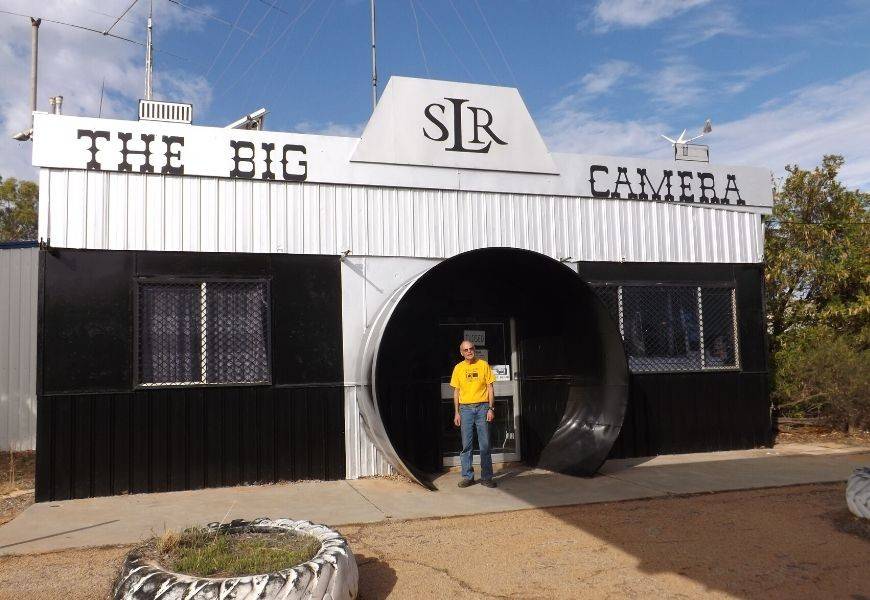 The man behind The Big Camera (or, in this case, in front of it), Charles ‘Chic’ Wadley. Image thanks to The Big Camera.
And it’s not just The Big Camera enjoying the benefits of services over the nbn™ access network in Meckering – Colton’s Café next door is too.

While it may not be ‘big’ in the traditional sense of Australia’s Big Things, at Colton’s Café, there’s certainly a big range of flavours and products on offer.

It all started more than 20 years ago when Louise and Ralph Colton decided to open up shop.

“Ralph and I opened the business in Meckering because we loved the community and there’s so much to see here.

“When a building became available in town next to The Big Camera, we decided to give something back and invested everything we had.”

The building, says Louise, was built shortly after that earthquake rocked the town in 1968 (we’re getting to it, promise!) inspiring the store’s vintage theme and “good old-fashioned handmade quality”.

With Ralph already the proud owner of a small, 30-year-old business making beef jerky – in five varieties from mild to spicy – they added to their product range and threw open the café doors. 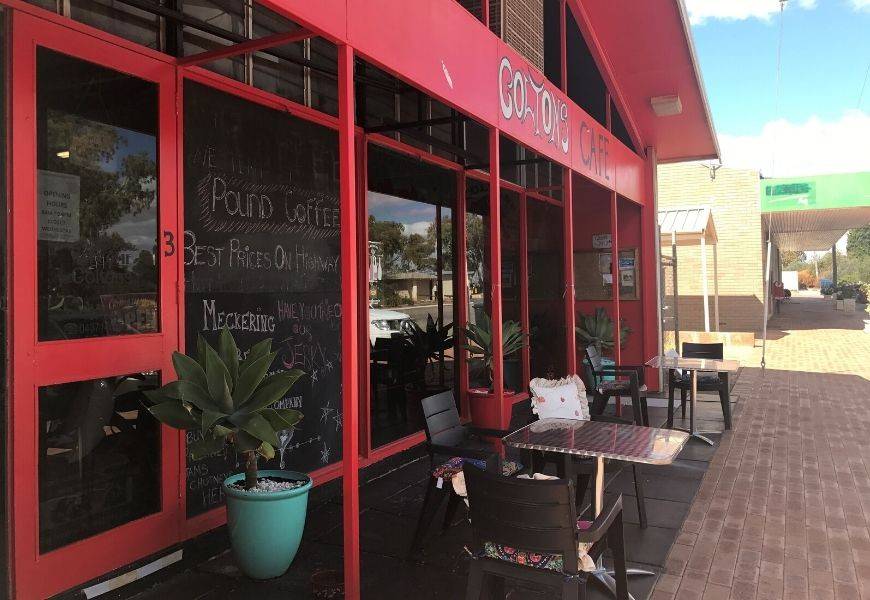 Image thanks to Colton’s Café.

“We have a wide selection of jams, pickles and sauces, including our own recipe called ‘Colton’s Sauce’ that’s proving to be popular,” says Louise.

“A couple of our sauces were entered into the Merredin Show on our behalf and both won prizes. Our tomato took out first and our Worcestershire came third. We try to use mostly heritage recipes.”

There are also homemade cakes, generous serves of breakfast and burgers, and their popular Rum & Raisin ice-cream on offer. The coffee is from Pound Coffee Roastery, a family business in Fremantle, whose small batches and handmade ethos are right at home at Colton’s.

And while, no doubt, man’s best friend would be on his or her best behaviour anywhere near that beef jerky, Louise explains there’s something for pets too at Colton’s Café.

“We’re pet friendly and have a pet section in the store. We welcome travellers to sit outside with their pets, and we donate to animal rescues and members of the community in need – we’re passionate about these things.” 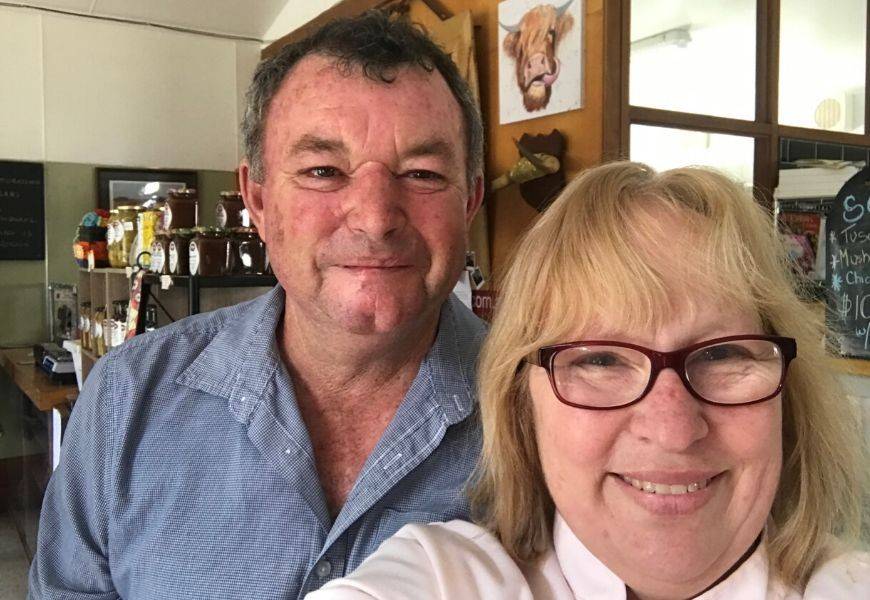 Ralph and Louise Colton. Image thanks to Colton’s Café.

So how do Louise and Ralph take advantage of connectivity to help run their business?

“We use our connection to services over the nbn™ access network to help us connect with our customers through Facebook and Google where we promote our products, which change daily,” says Louise.

“We also manage our bookkeeping online and have entertainment running while we work. Soon, we plan to open up stores through Amazon, Etsy and eBay so it will help us execute this.”* 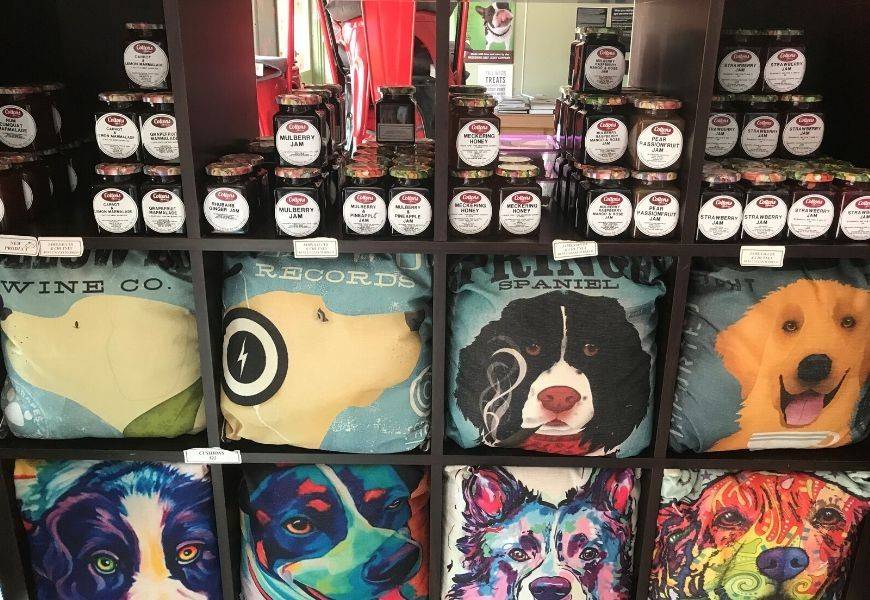 Pickles and pets, what more could you need? Image thanks to Colton’s Café. 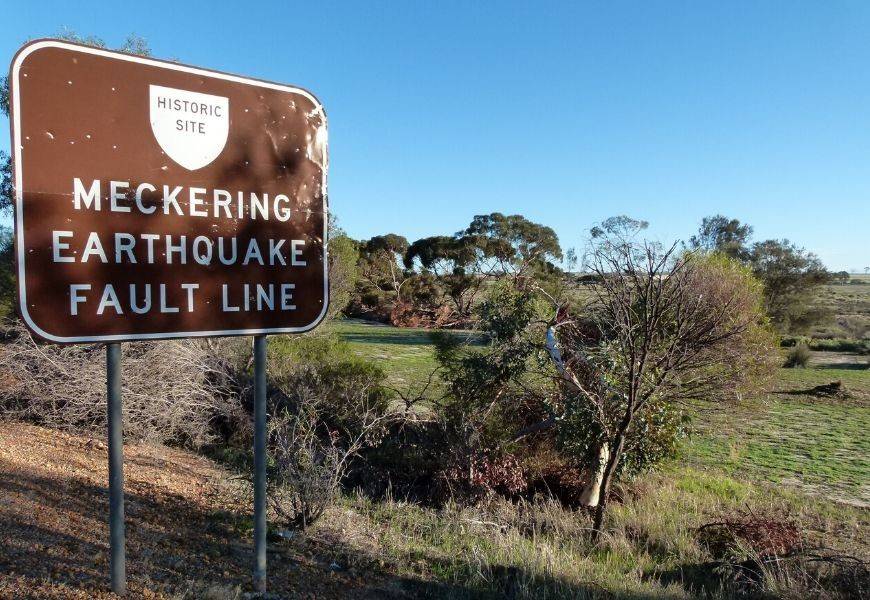 See, we told you we’d bring it back to the earthquake. And it was a BIG one.

While it may have been all over in 40 seconds, devastation was left in its wake: railway lines buckled, buildings were destroyed across town including a bank, hotel and churches, and around 60 out of 75 houses were razed. 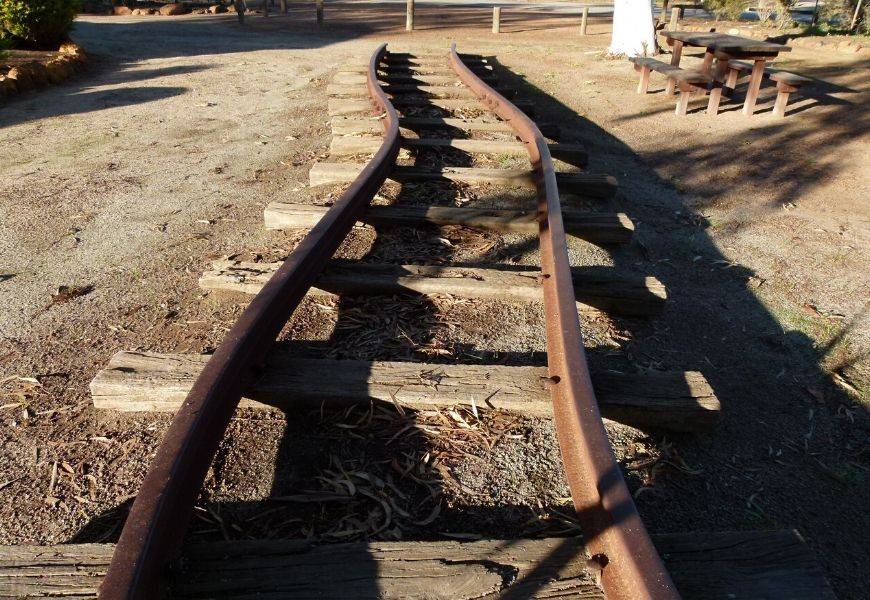 Compared to some older images from the time of the quake, the buckling shown here is relatively minor. Image: Photographs of Perth 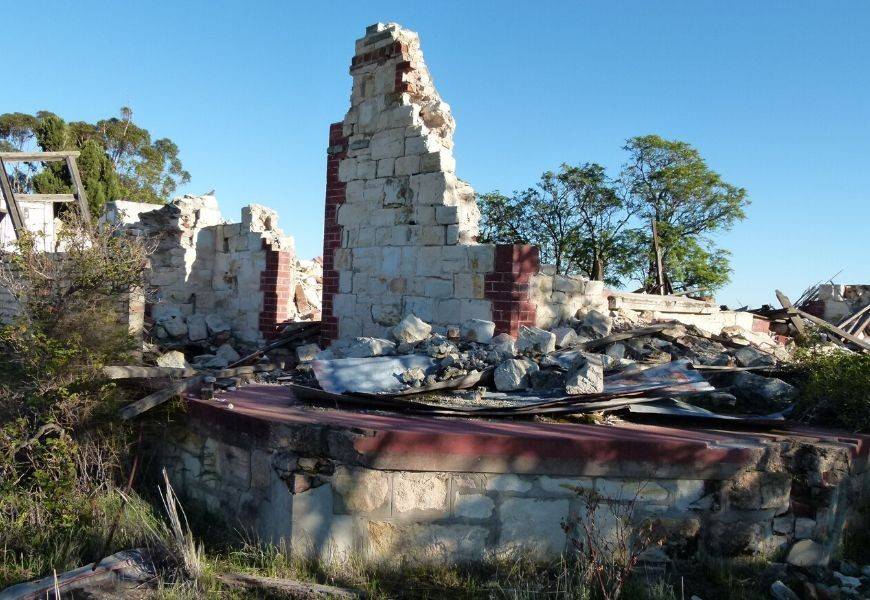 The first tectonic ground breakage to be recorded in Australia also occurred. Now known as the Meckering Fault, the quake caused the ground to rupture along a line for almost 40km, shifting it up to two metres vertically and 1.5 metres horizontally.

In all, the damage bill totalled more than five million dollars in 1968 money.

To mark 50 years since that fateful day, in 2018, the Meckering Earthquake Walk Trail officially opened. The trail takes visitors on a journey through the old town to discover what Meckering was like before the earthquake changed it forever.

Pick up a walk trail map at Colton’s Café when you grab that cuppa, bath bomb or jerky. 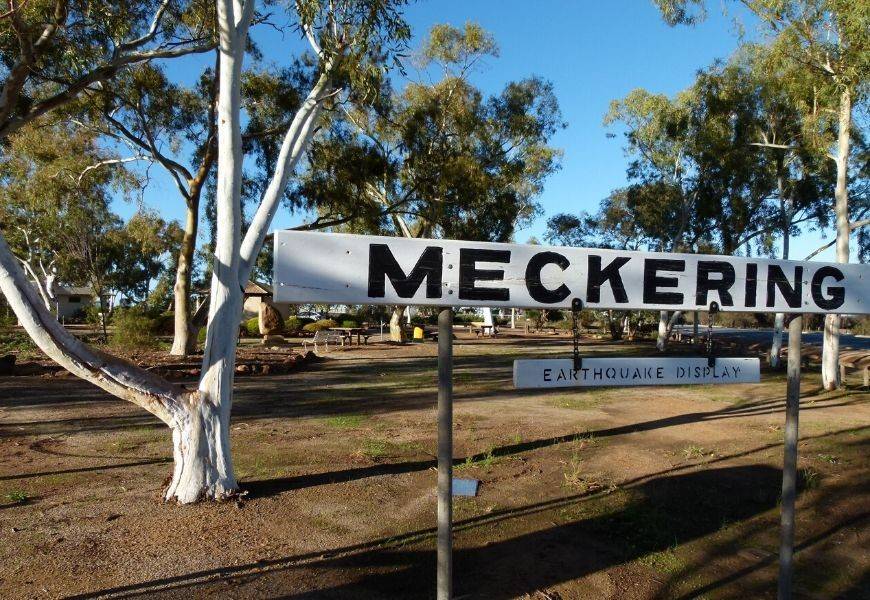 Well, after a big day of touring Meckering, we’re pulling into a rest stop to take a little kip.

Join us again next time as we continue our journey through Western Australia to visit some of Australia’s Big Things in nbn™ ready-to-connect towns, suburbs and cities.

In the meantime, read all about Eromanga, Australia’s furthest town from the sea.
* nbn is very happy with Chic, Louise and Ralph’s experience with the nbn™ broadband access network. Of course, end customer experiences may vary. An end customer’s experience, including the speeds actually achieved over the nbn™ broadband access network, depends on the nbn™ access network technology and configuration over which services are delivered to their premises, whether they are using the internet during the busy period, and some factors outside of nbn’s control (like their equipment quality, software, chosen broadband plan, signal reception, or how their provider designs its network). Speeds may also be impacted by the number of concurrent users on the nbn™ Fixed Wireless network, including during busy periods. Sky Muster™ satellite end customers may also experience latency.