Skip to main content
Related Articles
Rolling out across the country: the delicious Barossa Shrinking the digital divide Remote control: the business of flexible working

Pedal power: fundraising from Cairns to Karumba for bush kids

By: Lynette Keep | The nbn™ project | Published on 22 August 2018
Share on Twitter Share on Facebook Share on LinkedIn
Coinciding with news that NBN Co’s regional rollout is on the home stretch, a group of cyclists recently rolled across the Top End for ‘C2K’, the country’s longest event ride.

It’s the coast-to-coast bike ride that started back in 1996 through the Cairns School of Distance Education P&C Association.

With the initial aim to build a multi-purpose activity centre for the Cairns school site, the C2K (‘Cairns to Karumba’) bike ride is now staged each year to support and benefit kids who live in remote regions right across North Queensland.

This year, one of NBN Co’s Sky Muster™ satellite trucks accompanied riders on their exciting seven-day journey, providing them with the opportunity to experience our satellite service.

Connectivity would allow participants to track and share their achievements, recharge their phones and personal trackers, stay in touch with family and friends and, for some, continue to work during the journey by accessing emails and taking Skype calls.

C2K isn't a race – it's a challenge of the body and the mind. The 780-kilometre journey began in Cairns on Saturday 30 June 2018 with a single turn of a bicycle wheel under the pre-dawn drizzling skies of tropical Queensland.

Crossing five shires, the 130 participants – shadowed by their 50-plus support staff – took off at a time of least disruption to those in the northern tourism capital. 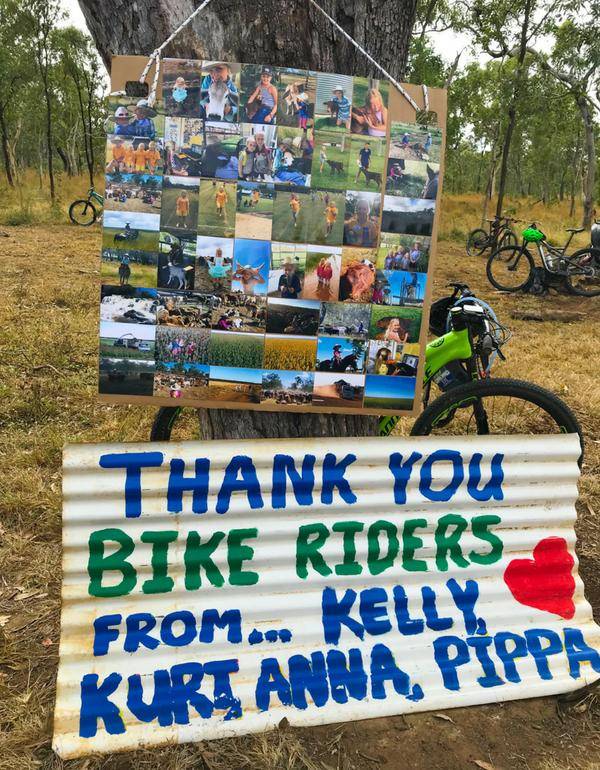 Supporters provided food and thanks along the route.
As the ‘riders up’ call was counted down, excitement shone as brightly as the strobing lights of the police car escort as it made its way along the esplanade. 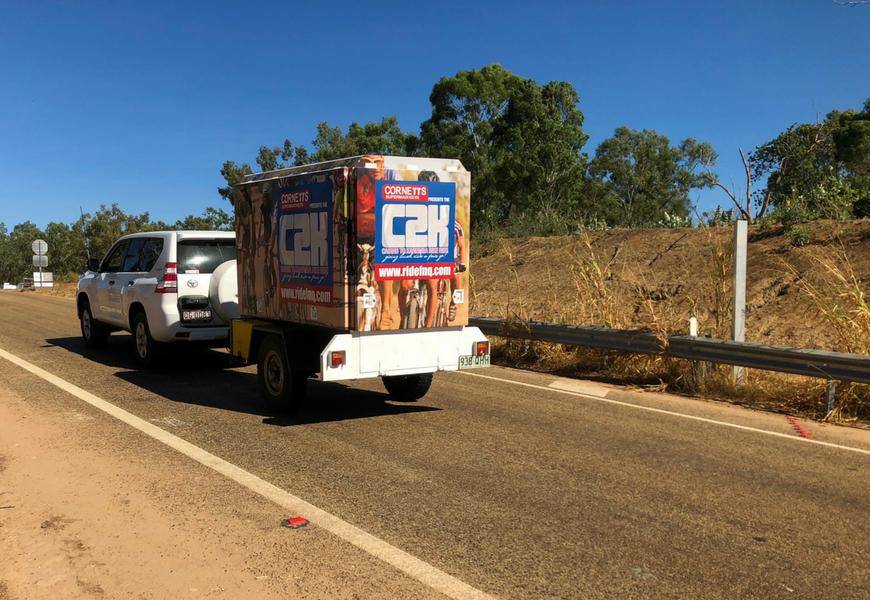 On the road again... supported by fifty friends and family who cooked, cleaned and provided medical and emotional support to all the teams.

The first day’s enthusiasm wasn’t dampened by the tropical rain clouds that followed the peloton up the Kuranda Range.

The severity of the 11.5-kilometre climb made lungs and legs scream for mercy, but the suffering was rewarded with spectacular views across the Macalister Range.

Morning tea at Kuranda, lunch at Mareeba and a total of 94 kilometres completed the opening day’s play at Atherton on the Tablelands.

For ride participant and nbn™ local manager North Queensland Marcello Massi, the punishment came from all angles, testing his body for the first time since major surgery at the end of 2016.

From the time his feet hit the dirt long before dawn until late into the night, Marcello and his NBN Co colleague Ren Wachtler were a vital part of the logistical challenge.

With the damp and drizzle on their tail, the priority was to check the radar to see just what Mother Nature had in store for the pushbike pack. 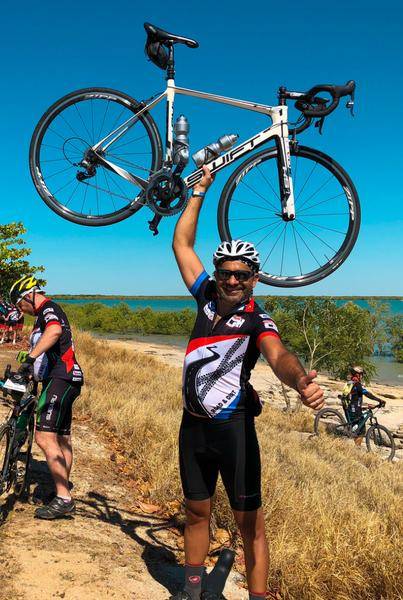 *Spoiler alert* Pictured to the right: nbn™ local manager Marcello Massi shows his delight at completing his journey. Proving his upper body strength is equal to that of his mind and the rest of his body.

NBN Co field engineer Ren Wachtler uses an in-built monitor on the Sky Muster™ satellite truck and access to broadband over the nbn™ access network to check the weather radar:

What had managed to stay dry on the first day, didn’t escape the second. Tents, clothes and shoes took on a damp depression of their own and the 105 kilometres from Atherton to Mount Garnet was tough in fog and trying conditions. Slippery surfaces and new gravel roads tested tyres and patience.

For the supporters, a 15-kilometre detour put some colour into the day. Yungaburra is a day tripper’s delight, made more exciting when residents painted the town pink to support breast cancer awareness and raise money for the McGrath Foundation. 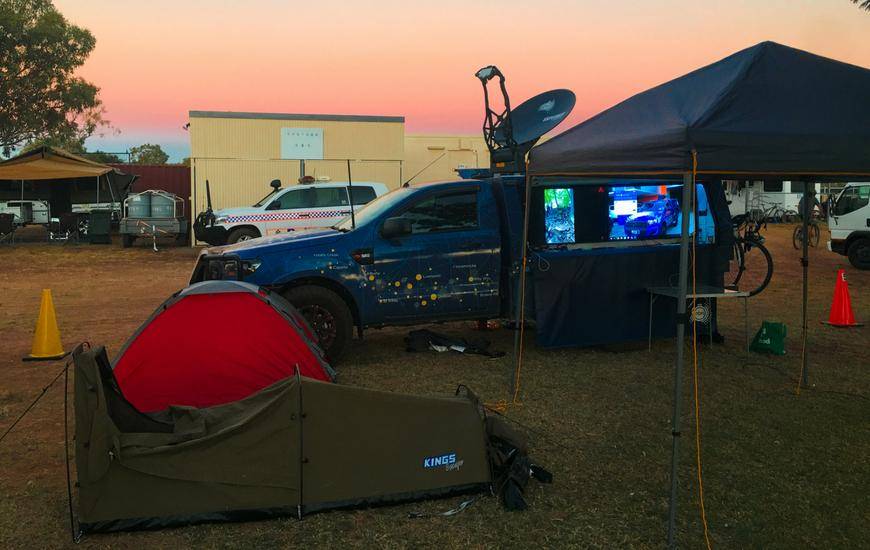 Connectivity with the nbn™ Sky Muster™ truck meant riders and support crew could keep in touch with family, friends and, for some, work colleagues.

Annie Power, owner of the eclectic Mad Hatterz Café, explained the heritage village had been connected to the nbn™ broadband access network for nearly a year, with connectivity helping her to operate the business and promote it easily on Facebook. Her bright café and sunny disposition were in stark contrast to those riders that continued to pedal on and leave Cairns 200 kilometres behind them.

The day’s rest time was welcomed, and so too the distinctive blue Sky Muster™ satellite truck, as the pack recharged their batteries and found time to report in to family and friends by connecting to the internet over the nbn™ access network.

On a foggy day, connectivity proved a rare shining light.

While the riders continued west towards the gateway to the gulf, a lunch stop worthy of the Tour de France was provided by the families of the Cairns School of Distance Education (SODE). The ride raises funds for the SODE organisation, and is their only fundraising activity for the year.

As Melissa Cow, a home tutor with the Cairns SODE explained, "Our students are from all over the state, so it’s a bit tricky to run a fete."


Melissa Cow, home tutor, Cairns School of Distance Education, shares how the funds raised will make a difference to kids across North Queensland:

Leaving Misty Mountains behind, a welcome surprise was in store in Mt Surprise at the end of stage three – none other than sunshine!

C2K is a ride divided into two equally keen groups.

There’s nothing rugged about the ‘Rugged Roadies’ who sit upon thousand-dollar carbon fibre bikes with streamlined tyres measuring their kays, speed and averages via an app called Strava. 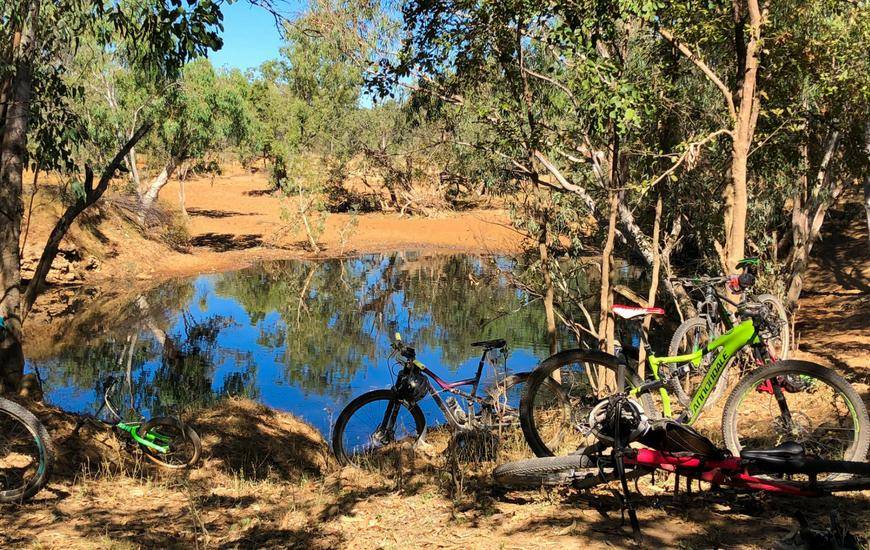 No mountains in sight for these bikes, standing on the banks of the Croydon waterholes flooded during the wet season earlier this year.
Then there’s the 'Dirty Boys'. There’s no asphalt for these men and women. They prefer the thrills and spills offered up by deep gullies, dirt and creek beds (main picture). Their success is measured by the layers of grime covering their bodies, the amount of bulldust they swallow (comparative to the amount they dish out) and the stacks they avoid, have and witness. 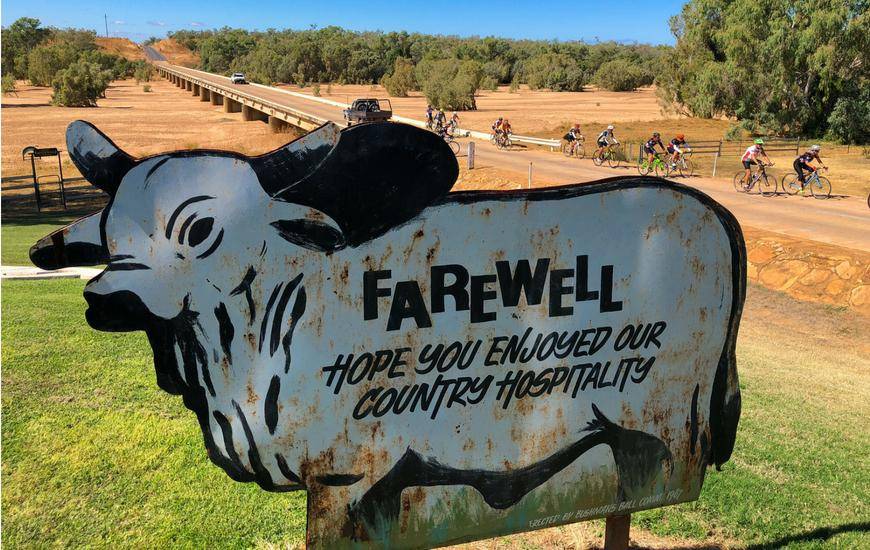 One person’s ‘fond farewell’ is another person’s ‘warm welcome’; near the bone-dry Etheridge River in Georgetown.

What the two groups have in common, though, is how quickly they can recount their stories to as wide an audience as possible. No day is complete without a Facebook post, Instagram pic, Snapchat or WhatsApp conversation.

They weren't certain what to expect on this adventure but once they realised our Sky Muster™ satellite truck could charge their fitness wearables, watches, two-way radios and mobile phones while providing Wi-Fi, the 'nbn™ van' soon attracted an eager audience.


So what did participant Rob Vallis, General Manager of Manassen Foods, think about being able to connect to the nbn™ access network using our Sky Muster™ satellite truck? 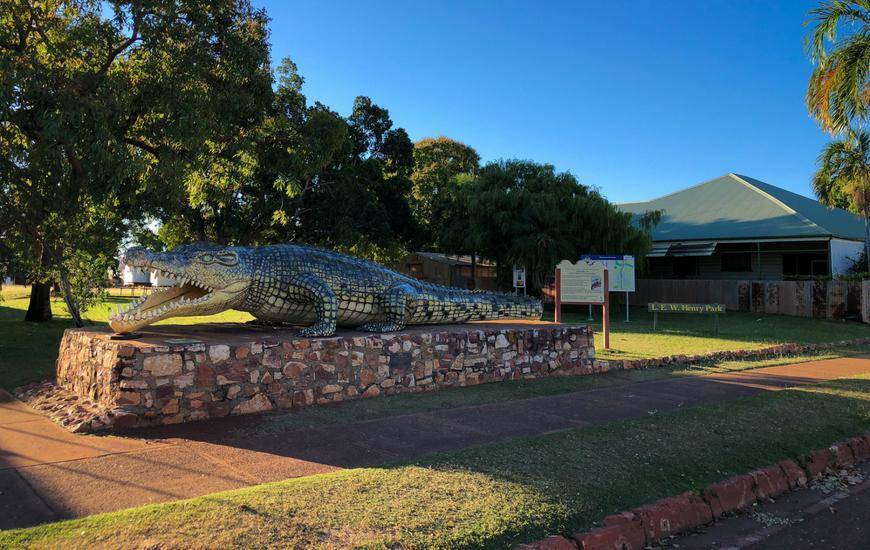 'Krys' is one crocodile that need not be feared. Located in the centre of Normanton, it’s meant to be a life-sized replica of a crocodile shot near the town in 1957, and named after the man who shot it. Experts claim the head-size and tail-length ratio do not add up; but it’s still a good story and popular photo opportunity.
C2K is ridden at a pace faster than a walk but slower than a car, allowing all the senses to be heightened. Yet, it’s not a ride on a bike path that presents an open invitation to cycle – this is the outback. 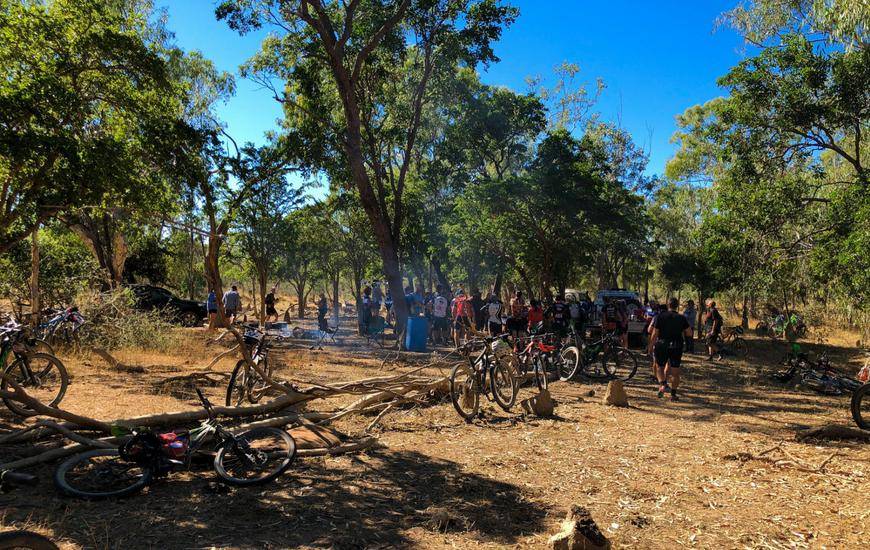 Time for a break and a campfire lunch at Tabletop Station, 30 kilometres northwest of Croydon.
Unlike those before it, the final leg saw no historical pubs en route, just the straight line of bitumen merging with the pancake-flat savannah plains. And while Lycra has become an ubiquitous sight on our suburban roads, out here the road-train truckies could be forgiven for thinking they were seeing a MAMIL*-mirage. 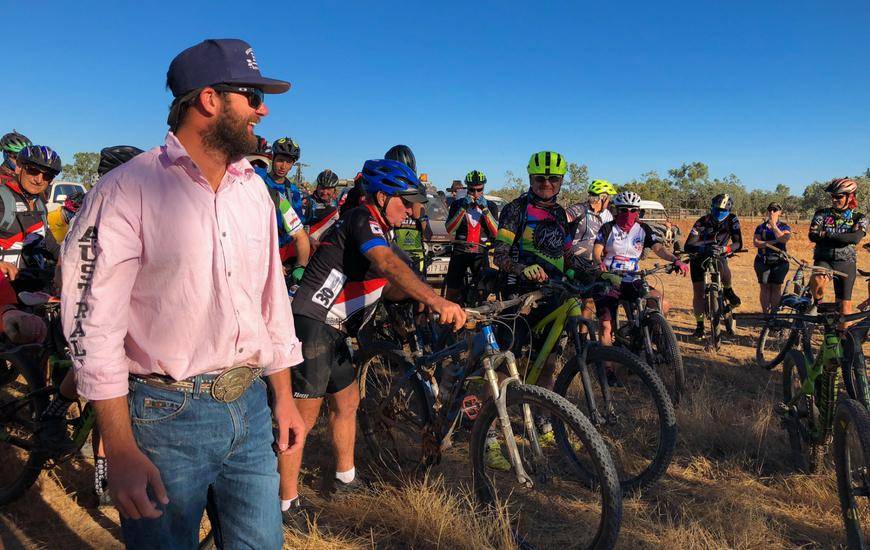 There was no mirage for the cycle circus, though, as they gathered as one and rolled into Karumba. The gulf’s bluest of waters provided the perfect backdrop for celebrations that were restricted to the sand but not restrained.

Having raised more than $100,000 for the education of kids in the bush along the remotest of routes, the riders and supporters connected over a cold drink, a sunset to remember and a sense of achievement proving once again that good connectivity offers great opportunities. 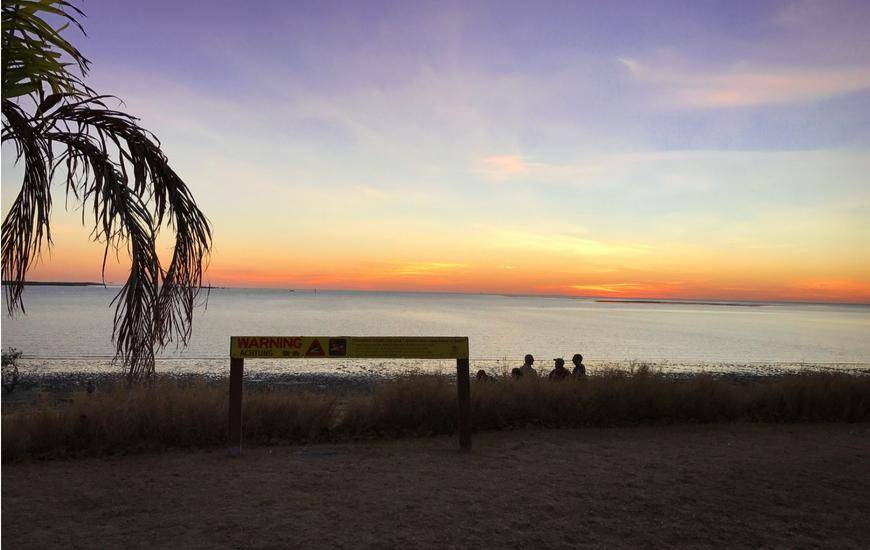 A picture-perfect ending to the final day of the week-long ride at Karumba Point. It sits at the mouth of the Norman River and is the gateway to the gulf and all things fishing.
Discover how we're helping to shrink the digital divide in regional and rural Australia.
*That’s a Middle Aged Man in Lycra, for the uninitiated.