Local farm finding its chi, thanks to connectivity

Are you a coastal or countryside person? Beach or bush? Land or sea? At Chi Medicinal Farm in Victoria – a bed and breakfast, kiosk and burgeoning organic farm – you get the best of both worlds.

Chi Medicinal Farm is nestled in a cosy nook where the world-famous Great Ocean Road snakes through the small town of Glenaire. On one side of the property, green rolling hills loom and, on the other, you’ll find the rugged and windswept coast of Castle Cove. While cows dot the grassy knolls that undulate as far as the eye can see, surfers bob atop the churning waves of the Southern Ocean, which the Twelve Apostles also call home just an hour further up the road. 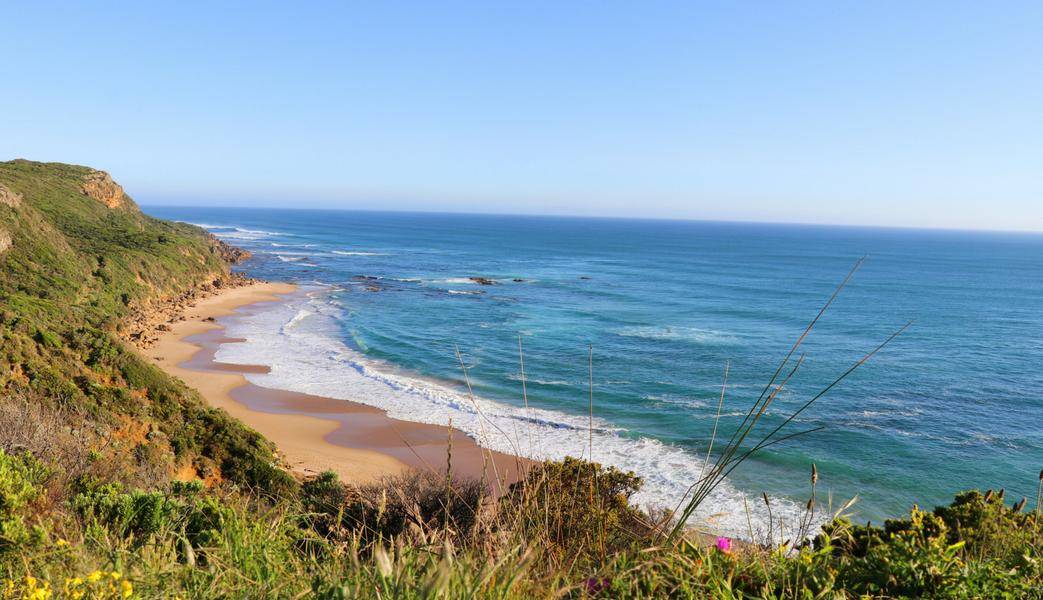 It’s this idyllic setting that captured the hearts and minds of former city slickers, Shane and Jodie Law. Falling instantly in love with the place, they soon staked their lifestyle and business dreams on the 12-acre parcel of land. And like many country properties across Australia, the couple found their internet situation less than ideal.

Explains Jodie, “When we first came here and we didn’t have any internet available, it was a real struggle. In fact, we were driving either to town or we were going up the hill to use our ‘office’.”

It’s a familiar story for many living in regional, rural and remote locations – the kind of experience we’re helping to transform by providing access to fast broadband such as via the nbn™ access network. A recent report into the rollout of broadband internet across the globe shows that, as a nation, Australia is investing twice as much on regional broadband as any other country in the world.

Sitting on the back balcony, looking out over the lush fields, it’s easy to be swept up in Shane and Jodie’s long-term dreams for their farm. Gazing out, you can almost ‘see’ it: the whole place flourishing with row upon row of medicinal herbs and botanicals, visitors milling about picking organic fruit and vegetables, and guests of their yoga retreat stretching in the afternoon sun. While this picturesque scene is still a few years down the track, it’s not difficult to imagine it all unfolding as planned with plenty of hard work, vision and internet connectivity. 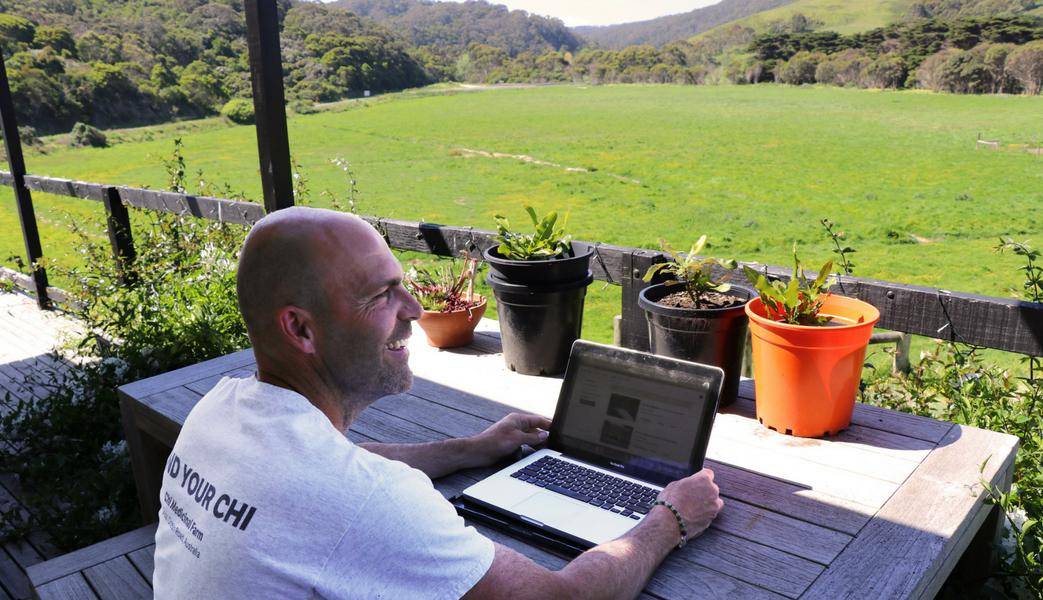 Shane enjoying that view from the back balcony.

“It’s a pretty new industry,” says Shane of the medicinal herb side of their business, “but I think it’s right on trend, and it’s within our philosophies of staying healthy and treating your body right.”

Shane and Jodie are currently growing herbs and botanicals such as rosella, tarragon and rosemary, as well as fruit and vegies, including strawberries, kale and eggplant. Everything they do on the farm aligns with their organic values. For instance, no pesticides are used anywhere on the property. And, in their strawberry patch, they don’t use the black plastic ‘mulch’ that usually covers crop beds. Why? Because it’s plastic and that’s just not organic to Shane and Jodie. 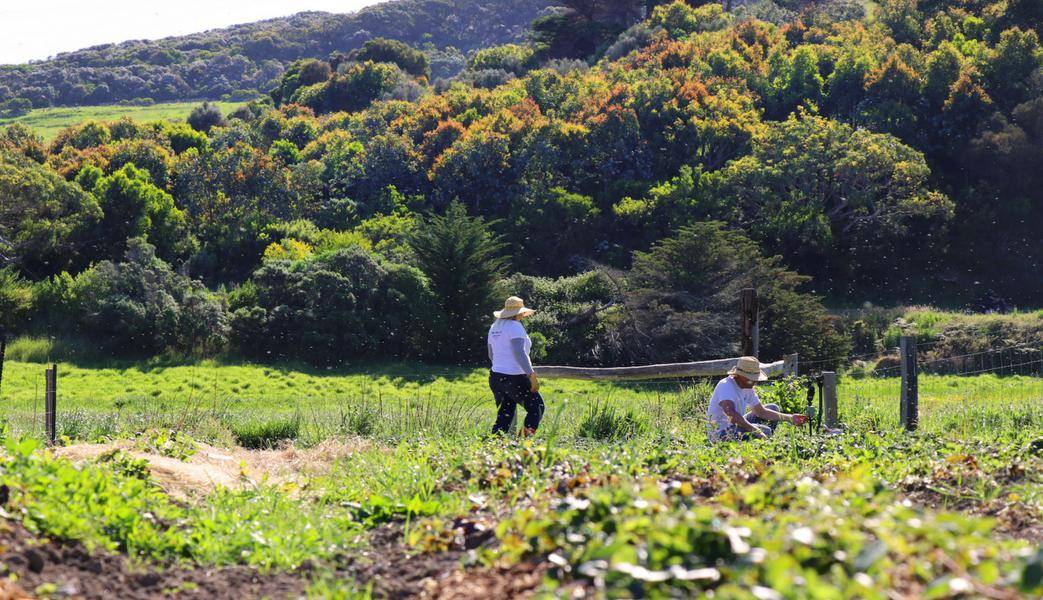 Jodie and Shane toil in the field.

Chi Medicinal Farm was a natural amalgam of the couple’s beliefs and talents – including photography and graphic design – Jodie explains. “The inception of that idea really came about from pooling all of our skills together, and our philosophy and interest in Eastern and Western medicines.”

During the high season, when the Chi Kiosk shutters roll open, they incorporate their home-grown produce into the available fare, which includes slow roasted soups, handmade breads and maple glazed cinnamon buns. Their clutch of free-range chickens – including one named Beyoncé – provides freshly laid eggs. And what they don’t produce on the farm is sourced locally, with B&B guests able to take advantage of their organic and paddock-to-plate approach all year-round.

Oh, and Jodie is one helluva cook. With no formal training, she cooked from a young age for family in her native Saskatchewan, Canada. Among the mouth-watering morsels on offer during our visit were baked fish, jacket potatoes with zesty green salsa, and a handmade rosemary and sea salt focaccia. All of this was enjoyed from the deck with killer views as the sun went down. (By the way, did we mention the cinnamon and coconut sugar donuts that were made from scratch for our dessert?) 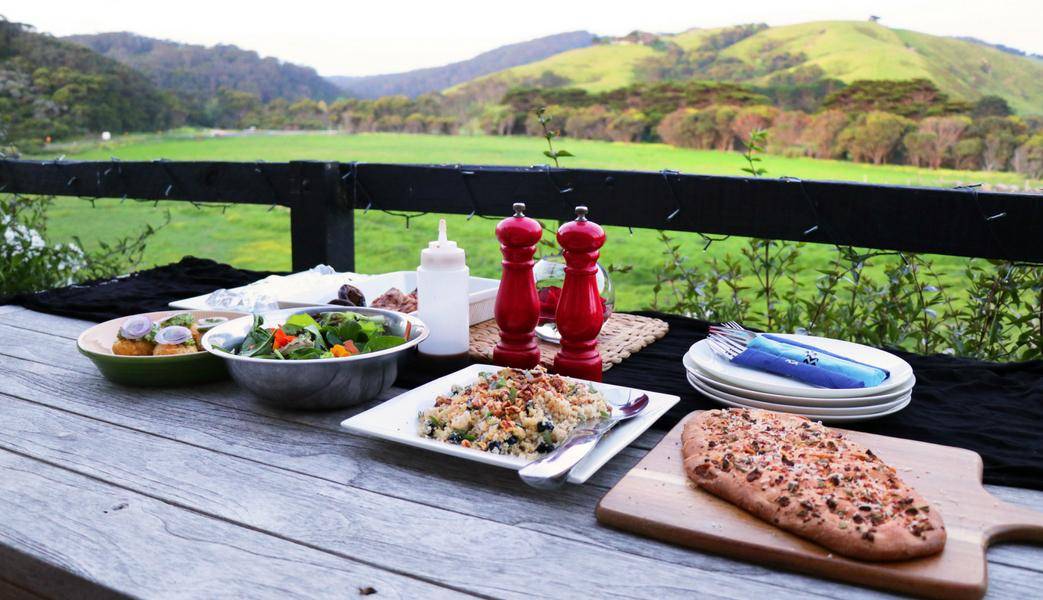 Dinner with a view.

Fortunately for past and future guests, internet connectivity at Chi Medicinal Farm is helping Shane and Jodie manage the business, advance their knowledge, and work towards their exciting future.

“As we’re growing, and as we’ve been given internet and access to the nbn™ network… we’re able to progress and move ahead,” says Jodie.*

All-important accommodation bookings are taken through websites like Airbnb, Stayz and HomeAway, while payments and their finances are also handled online. Before connecting to a service over the nbn™ access network, says Shane, they only had a handful of bed and breakfast bookings. After connecting to the network and using Airbnb, their occupancy rate for the first quarter of 2017 grew to a game-changing 93 per cent.

“We also have courses that we’re doing at the moment,” Jodie shares. One is through the online, American-based Chestnut School of Herbal Medicine. Prior to connecting to a service over the nbn™ access network, Shane and Jodie would stay up late or rise early to watch video tutorials during off-peak hours. Today, they can study whenever it suits them.

With their can-do attitudes, friendly (but not imposing) hospitality, and a true appreciation of their surroundings, you get the feeling that Chi Medicinal Farm will become anything and everything the Laws want it to be. Laughs Jodie, “I couldn’t do it without my husband and the nbn™ network – and that’s the truth.” 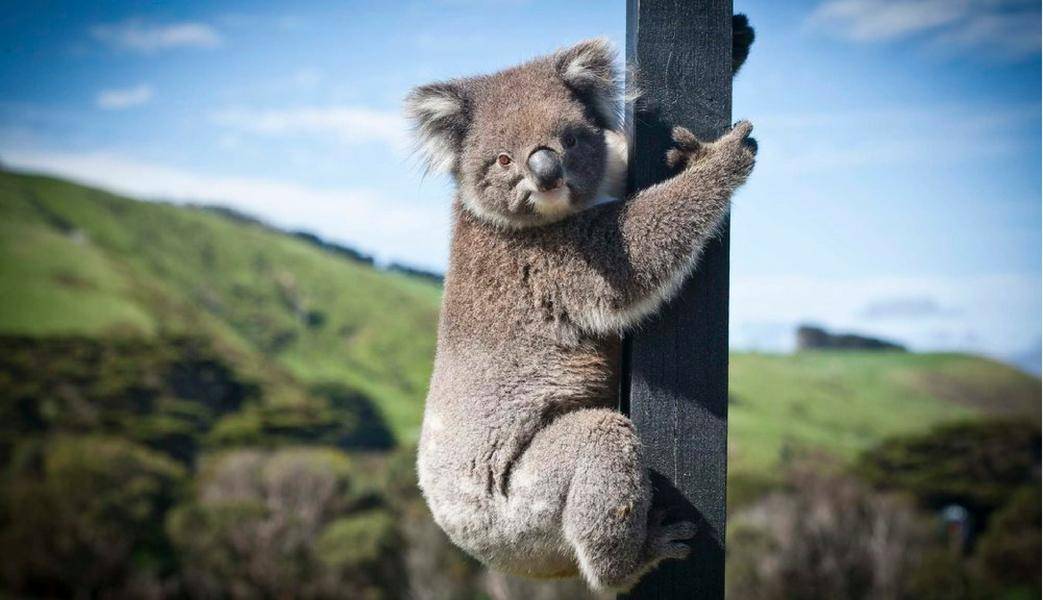 Even koalas love the place. Here’s one hanging around on the back balcony. Photo courtesy of Chi Medicinal Farm. 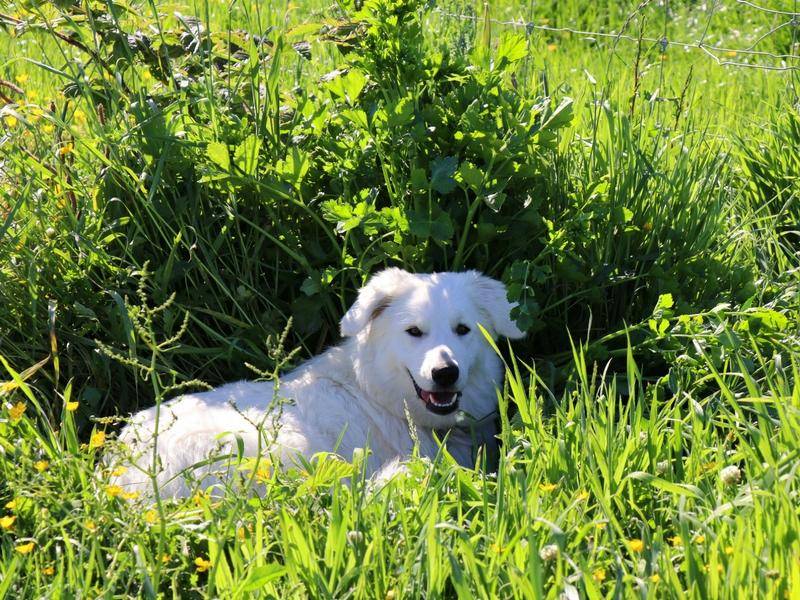 This is Mishka the Maremma. One, two, three, awww…
Not only will you find Shane and Jodie working hard down at Chi Medicinal Farm, you’ll also come across this gorgeous face. Mishka is the couple’s 12-month-old Maremma Sheepdog, the breed made famous in the Australian movie, Oddball. The film was based on the Middle Island Maremma Project in Warrnambool, which saw this breed of pup trained to protect a colony of Little Penguins. These clever canines are known as guardian dogs, protecting livestock from predators. Naturally nocturnal, Mishka heads out each night on patrol, making sure her chicken mates stay safe from wily foxes!

View results
*End user experiences may vary. Your experience including the speeds actually achieved over the nbn™ access network depends on the technology over which services are delivered to your premises and some factors outside our control like your equipment quality, software, broadband plans, signal reception and how your service provider designs its network. Satellite end users may experience latency. Shane and Jodie were paid a fee for their involvement in this interview.