Ultra-fast 10Gbps broadband arrives in America – for a lucky few!

American telco US Internet has launched the world’s fastest broadband services – so why can’t NBN Co do the same in Oz?

A Minneapolis-based company, US Internet, caused quite a stir in the international media with the launch of its 10Gbps fibre-to-the-premises (FTTP) services, making it the fastest residential broadband service in the world alongside Norwegian operator, Altibox. The news of the 10Gbps service – priced at US$399 per month – made its way to Australia, with some Aussies asking why we haven’t delivered such blistering speeds down under.

The simple answer is scale. Our mandate is to provide nearly universal broadband access across Australia. That means our services must cover around 12 million premises in total, across more than 7.6 million square kilometres. 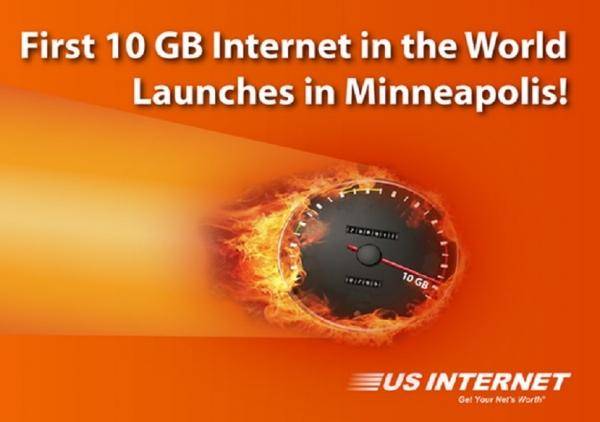 In contrast, American ISPs offering 1Gbps – or even 10Gbps – services are able to selectively pick and choose where they deploy services.

For its part, US Internet is offering its 10Gbps services only to selected areas of Minneapolis. Even then, new subscribers won’t start getting services until the springtime thaws out the frozen winter ground!

It’s a similar story when it comes to the other Gigabit players in the US market. Total numbers of homes connected to Gigabit FTTP services remain very low and make up only a tiny fraction of overall broadband subscribers in the country. In fact, cable and DSL-based services still dominate the US market. Even the much hyped Google Fiber – announced in 2009 – has only launched in Kansas City, Provo and Austin, with services only available in selected areas.

Major players like AT&T and Cox have already launched 1Gbps services, principally in greenfield areas, while Time Warner is also considering a major 1Gbps rollout in Los Angeles. Again, these are only in select markets, where the returns for private operators are generally quite lucrative.
There are also a number of smaller operators jumping into the 1Gbps arena across the US – with more than thirty 1Gbps launch announcements made in 2014. However, in a country of 120 million households, this still represents only a small percentage of total homes actually capable of receiving 1Gbps services. Plus, commentators have questioned the utility of 10Gbps rollouts when there are still no “killer apps” in the market that require such massive bandwidth capacity.

It’s quite possible that 1Gbps services will only really “arrive” in the US as a genuine mass market proposition once the country’s major cable operators start to push DOCSIS 3.1 services. That’s likely to occur from around the end of 2015.

While many Australians would love us to deliver 10Gbps FTTP services, it’s important to remember the monumental scale of our task – enabling broadband connectivity to nearly all Australian homes and businesses by 2020. To meet that goal, we have to focus on rolling out the network efficiently and affordably, rather than focusing on high end or niche services.