Every breath you take: virtual singing hits a note for quadriplegics

An Australian music therapist is showing how fast broadband and singing can change the quality of spinal victims’ lives.

“Help!” was a huge hit for The Beatles 50 years ago, and it’s coming to the rescue again…for a group of fans who have suffered devastating injuries.

Unique Australian research is finding that singing is powerful therapy for those who have broken their backs and become quadriplegic.

That’s because singing encourages paralysed patients to use muscles they may not previously have needed for the once simple business of breathing.

Now, with the fast broadband speeds being delivered over the nbn™ network and special equipment, these singing patients are on the verge of entering a whole new level in a virtual world.

Music therapist Dr Jeanette Tamplin is pioneering a program with quadriplegics to make life easier for them and more cost-effective for health services.

A 20-year veteran of music therapy, she says one of her quadriplegic patients had been training as an opera singer before he had an accident. 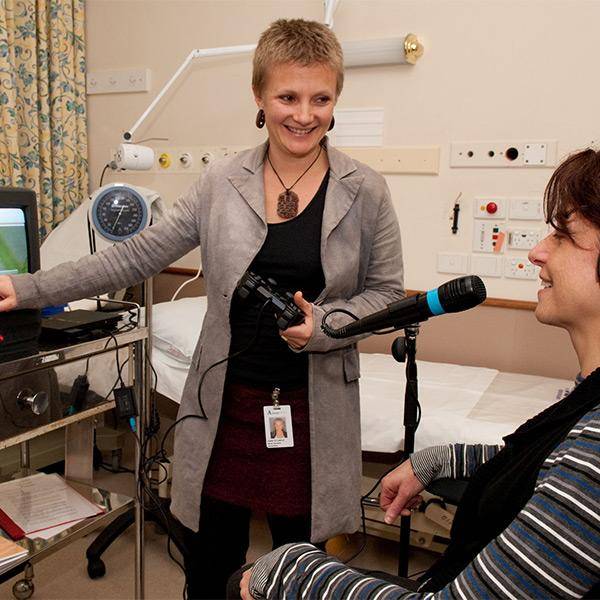 “He had this amazing operatic voice and he astounded all the physicians and rehab teachers with the way he could control his voice with little abdominal muscle involvement,” she says.

“These guys run out of air when talking so we need to encourage them to use other muscles, such as in their neck and upper chest, to try to help take deep breaths. That’s where singing comes in, because you use more air than when you are just talking.”

She says breath control is crucial for quadriplegics so then can call out if in difficulty and cough to avoid developing lung infections.

So Dr Tamplin, a therapist at The Royal Talbot Rehabilitation Centre and an honorary fellow at the Institute for Breathing and Sleep at Austin Health in Kew, Victoria, ran a 12-week singing course for a group of spinal injury patients to see if it could improve their breathing.

“This was unique research that hadn’t been done before,” she says. “We had some significant improvements in voice and respiratory function and expiratory muscles. They were using the muscles for breathing more at the end of this singing program.”

But she realised it was hard for the patients to get to the rehab centre for the sessions twice a week.

That’s where the internet and fast broadband over the nbn™ network come in.

“We thought telehealth … it’s the way of the future,” she says.

With her colleague Professor Gary McPherson of Melbourne Conservatorium of Music and the technical team at the University of Melbourne, she began work on a fast broadband program for singing therapy.

Instead of quadriplegic patients facing the ordeal of travelling in twice weekly to rehabilitation centres, Dr Tamplin said: “We are working on a virtual reality component with those goggles that are used in gaming, so guys with quadriplegia can appear to walk around on a virtual stage and perform in front of a virtual audience.”

It’s a liberating idea and Dr Tamplin is seeking the funding to make it a reality.

So are her patients natural singers, and what music works best?

“Typically they are youngish male, not the usual people who would join a choir,” she says. “We get truck drivers and BMX riders and skaters, it’s a risk-taking population.

“Generally we use their preferred music as it’s motivating, familiar and a good place to start.”

That’s where The Beatles come in. They, along with 60s and 70s rock and Top 40 hits tend to be the most popular, though, with the truck drivers, country music is probably a stand out.

“They all sing together,” says Dr Tamplin. “There’s a bit of friendly competition with trying to beat each other at singing the longest note. It’s a bit of fun and they get the reason is to help their breathing and develop their muscles.”

As with video gaming, the biggest issue is getting over internet lag, so that everyone is seeing and hearing the same thing at the same time.

“That’s where the faster broadband speeds make all the difference.”

Check your address to find out when the nbn™ network is available at your home or business.