Thank you Chair; with me today is Stephen Rue, Chief Financial Officer.

I was pleased to hear your focus was going to be on the nbn business model and the rollout in regional Australia.

It is not widely understood just how closely linked these two points are, and I hope the inquiry can help increase awareness.

As you know, Australia’s geography poses challenges that have troubled policy makers since the days of the overland telegraph.

Now that broadband has become an essential service, the calls for equitable services across Australia have been growing.

When the Government introduced the Australian Broadband Guarantee, or ABG, in 2007, a metro-equivalent service was defined as 512 kilobits per second.

Around 925,000 premises, roughly the same as nbn’s non-fixed line footprint, were eligible for the ABG.

We have seen a massive improvement in services with the introduction of Sky Muster™ and nbn’s Fixed Wireless service, which now offer speeds up to 50 times faster than the ABG threshold.

It is worth asking though, what it is about these 1 million premises that requires the Government to continually intervene.

Why hasn’t the market stepped in to meet the very strong demand, and why can’t everyone get a connection just like in cities?

Quite simply, it is the astronomical cost, and this has been recognised by all governments.

The original 2010 nbn Implementation Study contains a graph (p. 207) that shows the costs of a fixed-line connection for the most remote 10% of premises. 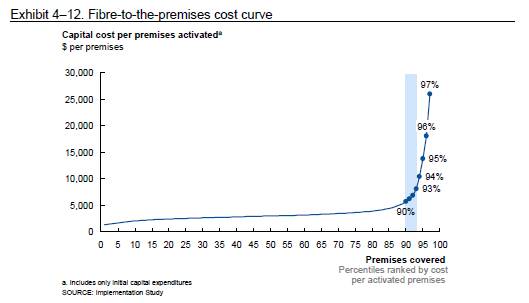 Many of those sat above the $20,000 mark (in 2010 dollars), just for one premises. As you get to the most remote premises that number grows exponentially.

Anyone can do the math and realise that Fixed Line is not a feasible solution for connecting these areas.

nbn has now almost completed an ambitious and cutting edge plan to get people in remote and regional Australia the best possible service.

We currently have more than 320,000 premises connected to Fixed Wireless or satellite, with access now available to more than one million homes.

I know that these technologies are of particular interest to the Committee, but let me just emphasise that ‘regional Australia’ does not automatically imply Fixed Wireless or satellite.

About three quarters of services in non-metro areas will actually be delivered via Fixed Line and the rollout of Fixed Line in regional areas is very well advanced.

But returning to Fixed Wireless and satellite – the nbn model recognises that these premises will never be cost effective or attractive for private companies.

An inherent cross-subsidy means prices in the city need to be high enough to provide funds for good services in the non-profitable areas.

It is, quite frankly, a tight model that can, on the one hand, expose nbn to greater competition as other providers seek to undercut our prices; and on the other hand, could lead to cost increases as greater demand and usage patterns emerge in regional areas.

Just on this point, it is worth remembering that the 2012 Corporate Plan anticipated about 23% take-up of FW and satellite services. The 2018 plan had this at around 60%. On towers that have been in operation for more than 18 months take-up is sitting at 53%.

This increase in demand, and the very different usage patterns we are now seeing through the “Netflix effect” means nbn needs to closely monitor costs right across the network.

Sometimes nbn needs to make tough planning decisions to keep costs down and to manage capacity on the networks.

Last week there was some media interest when I said we were not proceeding with the Fixed Wireless 100 product.

Now this wasn’t new; it’s something I flagged in February, and that I explained at Estimates in April.

As with any wireless broadband solution, capacity is finite and needs to be carefully managed to provide the best possible customer experience.

Providing more capacity can mean upgrading equipment on towers and in homes, greater backhaul capacity, and in some cases may require more spectrum.

When the idea of a 100 product on Fixed Wireless was first floated in the company, we weren’t seeing the kind of take-up and concurrency that we’re now seeing.

There has been a significant shift in usage and to offer 100 Mbps in these circumstances would require much more investment.

We felt the priority needed to be on maintaining current services and focussing on upgrades where required, not introducing a product that would put more pressure on the network.

We have been open about the recent congestion experienced in a small number of cells, and we have explained the rolling upgrades taking place to rectify this.

For cells that have a higher degree of congestion, we are actively engaging with RSPs to provide them with information so that end-users can be kept informed.

RSPs get monthly upgrade schedules and lists of current congested areas so they can manage expectations of their customers.

We are also actively monitoring the end-user experience. We continue to actively look at our options to respond to demand.

We are also looking at longer term plans for responding to congestion on the wireless network and are considering all available options.

I note in submissions to this inquiry, the issue of nbn products and pricing was raised (by Aussie Broadband).

We will continue to consult with retail providers on how our Fixed Wireless products and pricing will evolve.

We will update RSPs and end users as soon as we can on what our plans are, how we intend to provide the best possible product, as well as what end-user expectations should be.

Once again, I think this area of inquiry is very important and we look forward to assisting the committee as much as we can.