Is there life out there? The biggest eyes on the sky will see

Are we alone in space? How were black holes formed? What is dark energy?

One of the biggest and most complex scientific experiments ever dreamed up aims to find the answers to these and many more of the most challenging questions facing scientists.

And it’s already underway in the desert 800 kilometres north of Perth in Western Australia.

While its acronym, SKA, may sound cool, it’s a little less catchy when spelt out - Square Kilometre Array. Nevertheless, in scientific terms it will be as cool as it gets when it is completed. This radio telescope, made up of thousands of antennas in a collecting area of one square kilometre, is designed to capture images of deep space never seen before.

The telescope will be the world’s largest and most powerful, with its myriad of antennas - linked by high bandwidth optical fibre - capable of imaging objects in space… all the way back to the Big Bang. 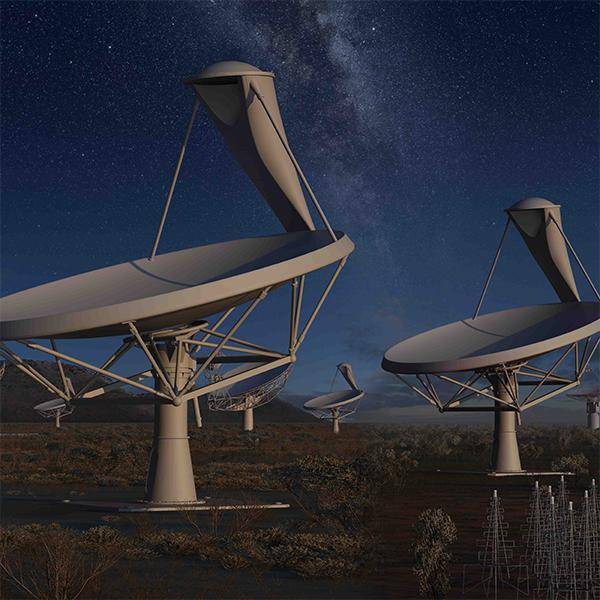 It will be 50 times as sensitive and 10,000 times faster than any radio telescopes that exist at the moment. In terms of educating us about space, dark energy, black holes, and extra-terrestrial life, there has never been anything like it.

The project, conceived in the 1990s and due for completion in 2023, has three precursor telescopes - two in Western Australia and one in South Africa. The two in WA - called the Murchison Widefield Array (MWA) - have been operational for two years. The SKA will be about 100 times bigger than the MWA and will be built on the same site in the WA desert.

To do its job the MWA project needs phenomenal computer power and very fast connections. That’s because radio waves produce digital data that have to be converted by computer into images. And for that, the MWA has a special relationship with us.

“The NBN plays a central role in what we do,” says Professor Steven Tingay, director of the MWA.

Not only are our services over the NBN critical to carry the raw material that, after analysis, will take our knowledge of the universe to the next level, but it is also is at the forefront of the next big challenge for big businesses - crunching big data.

In two years the MWA project has produced a colossal four petabytes of data - that’s one million gigabytes or the equivalent of over 5,700 hours of full HD video, and 50 scientific papers.

“It’s a massive amount of data and we need to get that out of the middle of the desert to somewhere where we can process it in a timely fashion,” says Professor Tingay.

With at least 11 countries behind the project - Australia, New Zealand, Britain, China, South Africa, Sweden, Italy, Canada, India, Germany, and The Netherlands - there’s a great deal of data to share and analyse on the way to SKA’s target completion date.

The CSIRO has built a dedicated fibre optic line to deliver data at a blistering speed from Murchison to Geraldton, some 300 kilometres to the south. But NBN Co took over from there, laying more than 400 kilometres of fibre optics for delivery of the mass of data to the Pawsey Supercomputing Centre in Perth.

“Without the NBN we would not get our data out,” says Professor Tingay.

“The MWA is leading the way. It’s early days but we are fully operational and we’re starting to see things we’ve never seen before,” says Professor Tingay.

At the moment physics doesn’t have an understanding of what makes up 95 percent of the universe, says Professor Tingay. But SKA will aim to solve, among other things, the mysteries of dark energy and “the cradle of life”, including whether there’s extra-terrestrial intelligence out there.

So, even though it’s early days in this multi-billion-dollar global quest to crack some of the toughest nuts in science, does he think we will be able to answer the question of whether we are alone in the universe?

“Life can exist anywhere energy can be transferred,” he says. “There are billions upon billions of stars, and billions and billions of galaxies. It would be ridiculous to think we are the only self-replicating conscious life force.”

“I suspect that life is probably pretty common in the universe.”