So far under the employment and training initiative, more than 60 students aged 18-25 have participated in our programs across the country, with several going on to join nbn full time or gain work elsewhere.

They include Holly Farquhar, who Ange O’Connor, as Project Officer, Deployment Operations NSW, explains below, has had her life turned around by the experience.

One of the participants in our first Chatswood Steps/Headspace program, Holly had been living with depression and anxiety for some time through her teenage years.

Her experiences had become so crippling for her once she became ill, she was being forced to give up her studies at TAFE.

Stuck in a lull, feeling restricted by her lack of confidence, Holly felt she didn’t possess the skills to gain meaningful employment, which in turn limited her ability and desire to leave the house and participate in the community.

With support from her mother, they both came to the realisation it was time to take one of the hardest steps for someone experiencing a mental illness can do: seek help.

Her mum suggested she approach Headspace to assist.

Holly became a client of Headspace for around a year before they recommended her to a specialised employment service aimed at assisting people with mental health barriers – Steps at Chatswood run by the Sydney Counselling Centre. 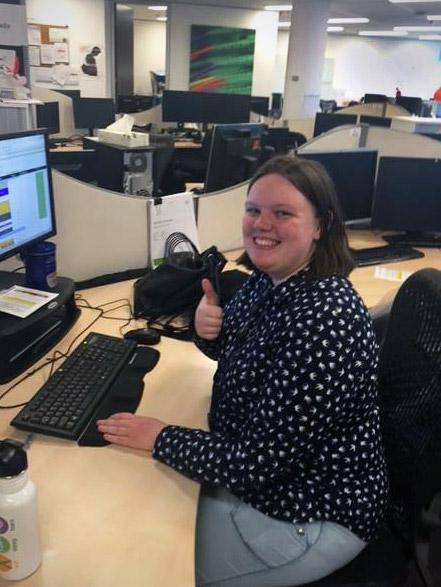 Holly giving her experience the thumbs up

It was during this consultation period, Steps advised Holly about a work readiness program being offered by nbn.

She was drawn to this program as it offered real life and practical training, along with certification and skills to include on her resume.

Not only did this spark Holly’s interest, the various brochures advertising the course provided more encouragement to participate in the program.

Holly says it was a simple, smooth process in terms of showing and enrolling her interest for the four week course.

She didn’t have specific expectations of the course, but was excited to attend and get something out of it. Holly tells us her favourite parts of the program were the “presentation skills” and “interview skills sessions.”

She found them “inspiring” and “confidence boosting” which as explained later, were a real need of hers.

She also explains that the interview sessions were realistic and that real hiring managers were asking real interview questions, which provided important skills and feedback.

Initially, Holly said that she wasn’t sure what to expect when joining the program – feeling mixed emotions around the level of difficulty; would it be meaningful and real work, or would it be too hard for her levels of experience?

Would it be like the school work experiences she had in the past?

When Holly first attended her work experience at Pennant Hills, she described it as, “an experience she had never felt before.”

She told us she felt “welcomed” and was entirely surprised at how nbn’s job ready program melded with the actual work tasks had been provided through her course.

Holly describes the team as being “collaborative” and “laid back, but hard working” and says the reality was entirely different to the work experience she had participated in during her school years.

At the Pennant Hills office she was given real, meaningful work and felt a sense of belonging and purpose.

When talking to Holly about how she came to apply for and become successful in a full time contract position with nbn as a project administrator, she describes the process as comfortable, but realistic.

She followed the normal job application pathway and experienced two separate interviews. She says that during this transition of work experience to applying for a real job, she had gained the confidence in selling the skills she had developed over the program and work experience and felt she had the necessary skills to be a strong candidate for the advertised role.

Holly has now been employed as a full time staff member in Regional deployment for several weeks.

When I asked her how it felt to be working for nbn, Holly says: “it’s been good for my mental health. “Being needed by a company that has invested in you is mood boosting; it motivates me to want to achieve something.”