Skip to main content
Related Articles
The jobs that will always be in demand Watch: Australia's super connected jobs of the future Send in the drones: How UAVs are changing industries

Drones are big business. And a start-up company in Newcastle has come up with a unique way for emergency services and industries to run them automatically from “hives”.

Drones are no game for Dr Chris Renton and Ilche Vojdanoski. The two ex-University of Newcastle students intend to make them big business.

And they are not alone.

The market for commercial and civilian Unmanned Aerial Vehicles (UAVs) around the world will grow at a rate of 19 percent a year over the next five years, especially in agriculture, construction, mining and media, according to a report last month by BI Intelligence.

But Dr Renton, an expert in mechatronics and autonomous vehicles, and Mr Vojdanoski, who has 10 years in marketing and sales, have come up with a novel way of not only keeping drones in the air longer but of automating how they work. They call it HiveUAV. 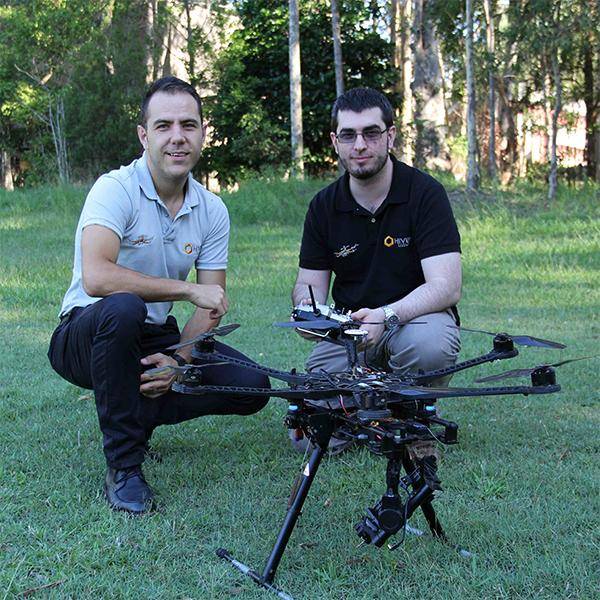 “We saw there were gaps in current knowledge,” says Mr Vojdanoski. “Drones can usually only fly for 20 minutes because of battery life. And you have to manually operate them to take off, land and then get the imagery off the card and process it.”

“We thought there’s got to be a better way. Why not automate the whole process and operate it from your iPad or computer? Let’s take the whole manual side out of it.”

Their idea, which will make use of the faster speeds made possible by the NBN, is to have mobile “hives” of UAVs, which can be carried on the back of a trailer and left in an area where the data is needed, perhaps by firefighters battling a bushfire, police managing a highway crash, or farmers tracking stock or dealing with pests.

The hives - which are one square metre - will contain a number of drones to carry out a pre-programmed mission, which will be launched via the internet.

The operator could, for example, be sitting in an office in the city and launch the mission on a smartphone, tablet or computer.
That would instruct the hive to automatically launch a drone to fly the required route until it was time to return to the hive to recharge while a second drone took off to continue the mission.

The sequence of fly-and-recharge could be repeated to maintain seamless data records. And that data - whether visual or scent - could be stored and transmitted from the hive or looked at live elsewhere via our fast connection.

“Having the NBN available offers a wireless solution which essentially enables us to connect and have the range and ability to transfer data at a faster rate than currently available,” says Mr Vojdanoski, who has been enjoying fast speeds over the NBN while working on the project at home.*

He and Dr Renton have successfully got their new start up into the Slingshot program which backs and mentors new globally scalable internet business ideas that will benefit from faster internet speeds over the NBN.

Their robust AUVs will be built in Australia and they have five trials planned this year with emergency services, and businesses involved with agriculture, construction and mining. The first trial will be held in April 2015 in the Hunter Valley, NSW… tracking wild dogs which have been killing sheep.

* Your experience including the speeds actually achieved over the NBN depends on the technology over which services are delivered to your premises and some factors outside our control like your equipment quality, software, broadband plans and how your service provider designs its network.