Dreamtime to cloudtime: how fast internet will change life in the desert

For thousands of years, Aboriginal communities have passed their stories on by word of mouth from generation to generation. The launch of our satellites will create a new option.

There’s a new story for Australia’s first people… and it’s being told in the cloud.

The arrival of broadband technology in some remote desert communities is transforming communication and has led to inspirational initiatives like the Ara Irititja Project.

Ara irititja, which translates as “stories from a long while ago”, is a growing project collecting material and stories from the vast Anangu lands in far northwest South Australia and building a multimedia database to maintain that culture and language to deliver back to the people in the area and beyond.

“It’s a fantastic project which relies on cloud technology,” says Daniel Featherstone, general manager of the Indigenous Remote Communications Association. “It gets used a lot and is a fantastic way of engaging people.”

So will the tradition of passing Dreamtime stories on from generation to generation by word-of-mouth give way to a new technological approach?

“It’s already happening,” says Mr Featherstone. “The Ara Irititja Project is exactly that and it will increasingly be the case... the biggest limitation on that is lack of good internet services, so once the NBN’s long-term satellite service comes in these things are really going to take off.”* 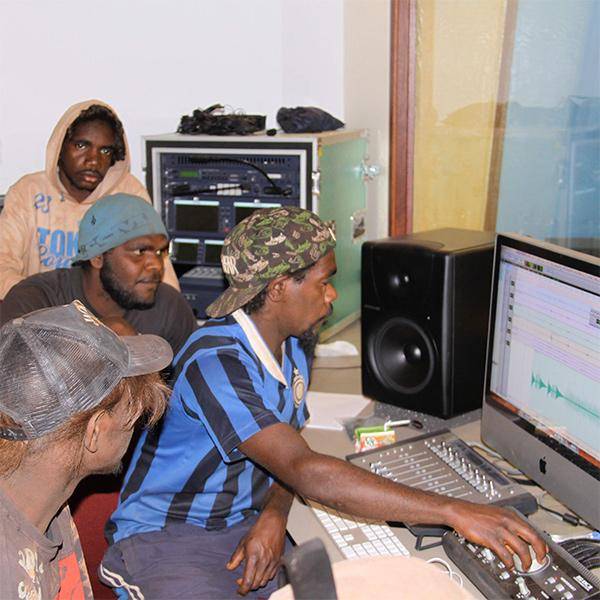 Staying in touch in the desert. Photo courtesy Ngaanyatjarra Media.

The arrival of some broadband services to remote communities has already resulted in huge benefits.

“Broadband makes remote not remote. In old times we would see a smoke signal and maybe walk 100 kilometres. Now with a mobile phone we can get that message straight away.”

That comment from Kelly Robinson to the Indigenous Focus Group Day at the Broadband for the Bush forum last year, is testimony to how Australia’s first people are shifting up a technological gear.

Ms Robinson lives just south of the Gibson Desert in Western Australia in the indigenous community of Warburton, which was one of six Ngaanyatjarra communities to get broadband in 2008, under a joint partnership between the state and federal governments and the local shire and council.

It is one of the places where Facebook is the primary way of connecting communities, says Mr Featherstone.

He recalls that when he first went to Warburton in 2001 “you couldn’t get fax machines to work properly”. But now doctors and teachers were video conferencing and police were holding remote court hearings via the internet.

“It has made a huge difference to that region,” he says. The availability of our satellite services next year will accelerate those benefits across remote communities.

The Broadband in the Bush Alliance meets again in Darwin on July 15 and 16.

* Your experience including the speeds actually achieved over the NBN depends on the technology over which services are delivered to your premises and some factors outside our control like your equipment quality, software, broadband plans and how your service provider designs its network.