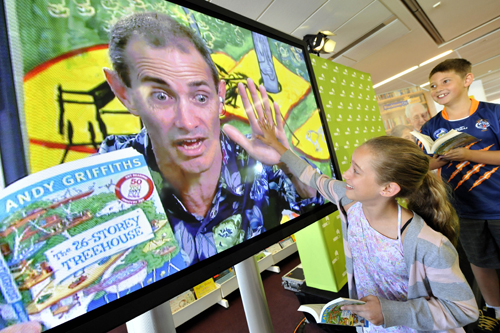 Blacktown has become the first suburb of Sydney to switch on to the National Broadband Network.

Superfast broadband now passes 1300 homes and businesses in Blacktown with a further 9300 premises in the area to come online over the coming months, including premises in Lalor Park.

The Sydney switch-on was marked with a ceremony in Blacktown this morning which included the first live NBN-enabled children's book reading session.

Popular Australian children's author Andy Griffiths read extracts from his international best-selling books and spoke about his writing life with children at the Max Webber Library via an NBN connection made possible by phone and internet service provider Optus.

"It's a whole new way to reach readers and stimulate young minds," said Mr Griffiths. "Better broadband is essential for Australia if we're to keep pace with the rest of the world."

Educators agree. A study produced for NBN Co shows teachers in NBN-enabled schools believe better broadband will help students to improve the quality of their work and the way lessons are delivered^.

According to NBN Co's General Manager of External Relations, Trent Williams, superfast broadband will open up new opportunities for families in Blacktown and throughout Australia.

"Families in Blacktown and other areas where the NBN is available are encouraged to contact their preferred phone or internet service provider to see how much they can save by connecting to the NBN."

In a recent study of the NBN first release site in the Melbourne suburb of Brunswick, nearly half of existing NBN users polled said household internet costs were roughly the same since switching to the NBN, and 14% were paying less by using an internet phone service instead of a separate landline. Generally, those paying more were willing to do so to receive higher speeds or larger download allowances.+

Construction of the NBN set to have commenced or be complete for around 1.4 million premises across NSW and 4.85 million nationally by mid-2016. The nationwide rollout is due to be completed by 2021.

# End user experience including the speeds actually achieved over the NBN depends on some factors outside NBN Co's control such as equipment quality, software, broadband plans and how their service provider designs its network.