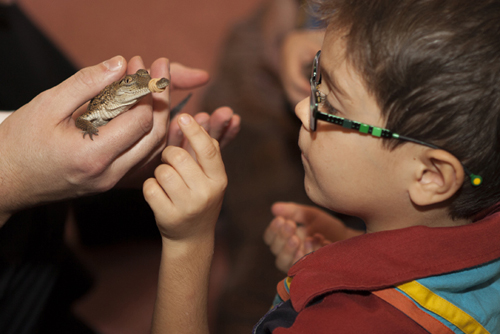 They may be separated by more than 4000 kilometres, but the deadly crocodiles of the Northern Territory had their eyes trained firmly on Launceston’s Scouts and Guides today, thanks to the National Broadband Network.

Scout and Guide troops from Tasmania were among the first to experience superfast broadband which was switched on this week in both Launceston and Darwin.

The children beamed in to Australia’s Top End via a fibre optic broadband connection to take part in the world’s first NBN-enabled croc awareness class.

“The kids got to know the crocodiles up close and personal,” said Top End croc hunter Aaron Rodwell, who conducted today’s lesson live from Darwin City Council. “That’s what I love about the NBN. The quality of the connection makes it feel like everyone is in the same room together regardless of the distance.*”

“Imagine if every Australian can connect via a high definition connection. The NBN can play a crucial role in bridging the great distances between us and bring all four corners of the country much closer together.”

NBN Co’s Community Relations Manager for Tasmania, Lalla Mackenzie, said: “Deadly crocodiles may have a strong bite. But the NBN has megabytes.

“People on the NBN are discovering they can work from home like they would from the office, get all the family online at once and stream TV over the internet without worrying about constant drop outs.*”

“Tasmania is at the forefront of an NBN rollout that we are seeing ramp up, with the entire state set to be the first to be fully connected by mid-2015.”

Around 4,300 families and businesses in Launceston can now connect to the NBN fibre network through 14 phone companies and internet service providers in areas bordered by George St, Howick St and Bathurst St and stretching as far down as the Tamar/North Esk river heads area.

The two-way HD videoconferencing connection was delivered by broadband providers Internode and iiNet.

*      Your experience including the speeds actually achieved over the NBN depends on some factors outside our control like your equipment quality, software, broadband plans and how your service provider designs its network.

^ Based on a comparison between plans based on the NBN's 25/5Mbps wholesale speed tier and ADSL2+ plans with equivalent monthly usage allowance from providers covering at least 80% market share by subscriber volume. Comparison made on 9 July 2013.

These maps show the estimated likely coverage areas based on the current rollout schedule.