NBN Co – the company building and operating Australia’s broadband network – has recorded a 46 per cent increase in revenue to $1.3 billion as incremental growth continues across all key metrics.

At the conclusion of the first half of the fiscal year there were 8.1 million premises ready to connect due to the scaling of the network build which added 1.1 million premises to the footprint over the six month period.  This means that approximately 70 per cent of Australian homes and businesses are now able to order a service over the nbn™ access network.

More than 4.6 million homes and businesses were connected to the nbn™ network through a retail service provider as at 31 December 2018.

As the build gathers pace, so does the company’s revenue, which surpassed $1.3 billion in the first half of the 2019 fiscal year. This revenue increase was supported by an uplift in ARPU to $45 per month, indicating the company’s progress towards reaching ARPU of $51 by FY22.

“I’m proud of the nbn team and industry wide effort to deliver another remarkable set of results over the last six months.

“With less than eighteen months of the rollout remaining, there is a significant amount of work still to be done in partnership with the industry, as we continue our momentum to deliver on our biggest ever deployment year and transition into our biggest activation year.

“I have full confidence in our ability to reach our 2020 target as our strong track record demonstrates.  The executive leadership team remain focused on ensuring universal broadband access to all of Australia by the middle of next year.

“In partnership with the industry, we are continually seeking to make further improvements to ensure an end user customer experience which is aligned with consumer expectations.

“As we continue to make more and more premises ready to connect each month, this is helping to ensure the nation is at the forefront of digital innovation to deliver enhanced social and economic benefits across the community.”

NBN Co also released its latest monthly progress report for January 2019, showing that 91 per cent of nbn™ equipment installations in its control were done right the first time, and that technicians are meeting 87 per cent of the agreed installation times with retail service providers over the month of January 2019.

Retailers are continuing to embrace new wholesale pricing discounts, which has seen 57 per cent of activated premises connected to the 50 Mbps wholesale download speed tier plans or above, compared to 16 per cent for the same time last year.

In December 2018, the company delivered on its commitment to publish performance for Fixed Wireless cells during busy periods.  This follows a previously announced $800 million upgrade program to expand the capacity of our Fixed Wireless network. 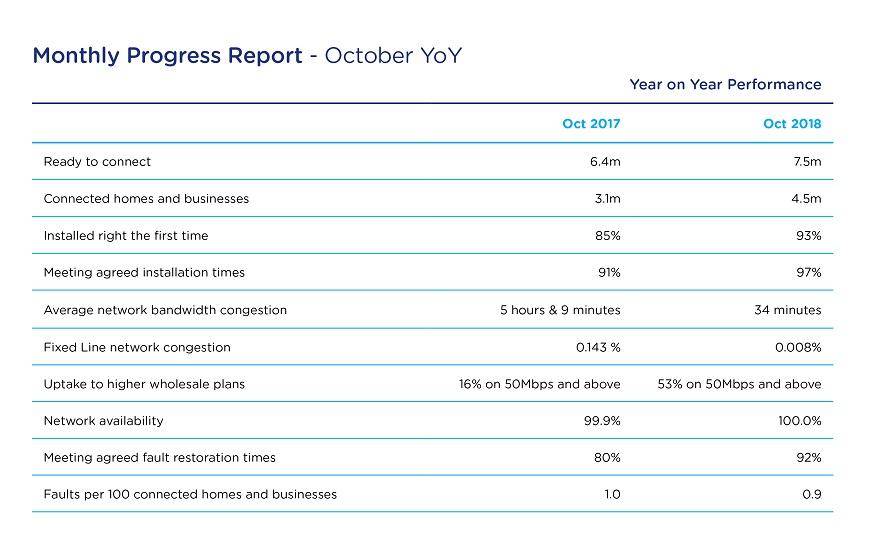