Video conferencing, video streaming and accessing cloud-based office applications have driven a large increase in data demand on the nbn™ access network as more Australians turn to their broadband services for work, education and entertainment.

NBN Co today launched Australian Broadband Data Demand, a new weekly report revealing significant increases in download peaks since the end of February. The report shows the highest throughput (the measure of data flowing through the nbn™ access network) recorded in a week during each of the following three periods: the daytime business hours, early evening hours and busy evening hours.

It comes as more Australians self-isolate and increasingly rely on services over the nbn to remain connected to work, school and higher education, entertainment, family and friends. 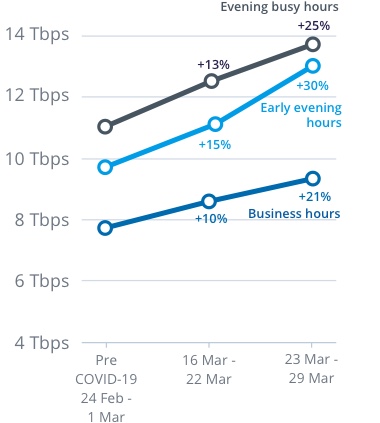 NBN Co considers the peak throughput metric as the most appropriate measure for growth in data flowing through the network, as it shows when usage is at its highest in each defined period.

While this new metric measures the difference between peaks (which may occur at different times in each defined period), since social distancing measures were implemented, traffic on the nbn main wholesale service has also significantly grown with business hours usage increasing by more than 70 per cent (as shown in the graph below at 11am). 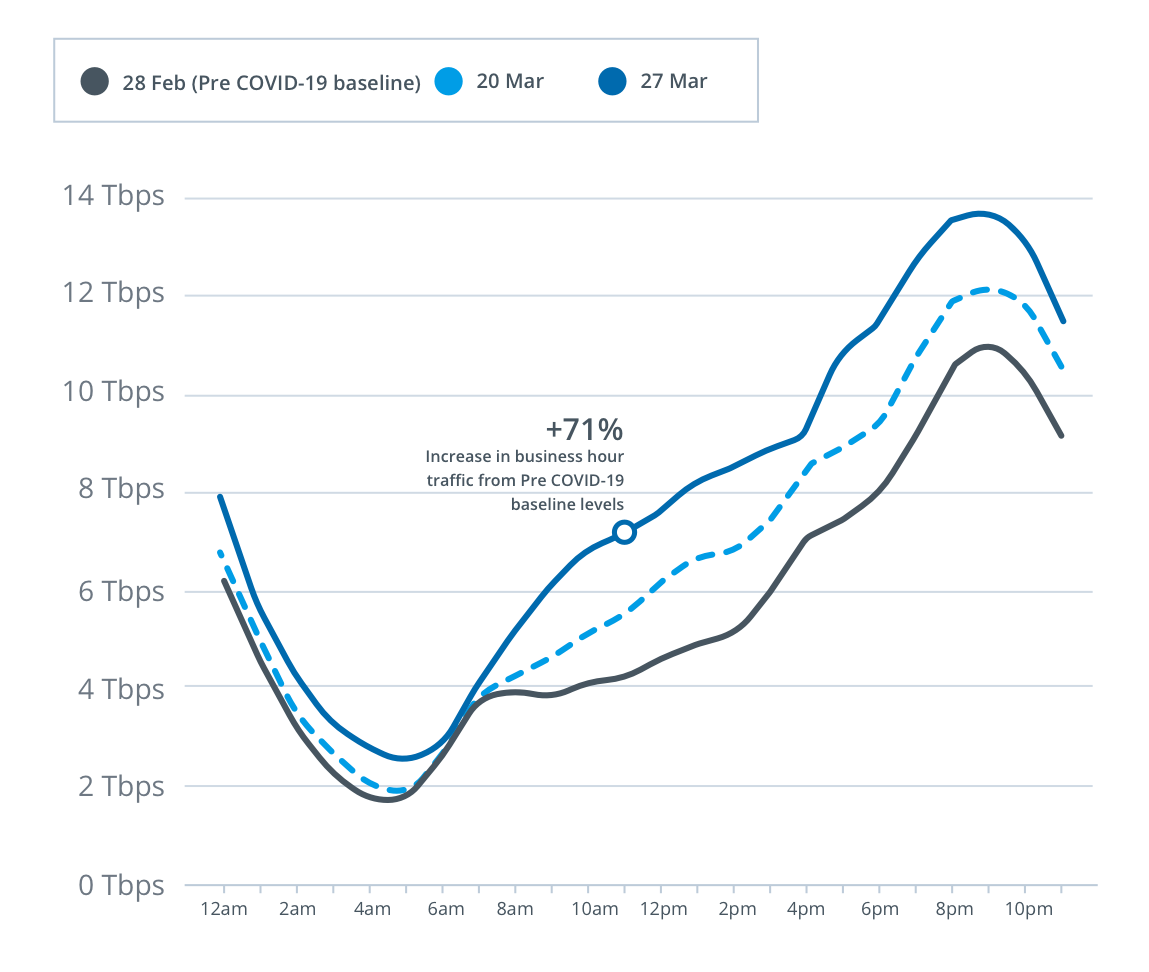 However, since the last week of February, there have likely been large increases in the use of video conferencing and business applications as more people work and study from home.

The nbn has been engineered to support large capacity increases today and into the future to support Australia’s broadband needs, and as data demand has grown since social distancing measures were implemented to slow the spread of COVID-19, services over the nbn have continued to perform well.

The new report follows NBN Co’s announcement on 18 March 2020 that it will waive charges for additional capacity of up to 40 per cent to internet providers for at least three months, as it leads an industry-wide approach to maintain access to reliable, high-speed broadband for nbn residential and business customers.

By publishing the new statistics, NBN Co intends to keep Australians and internet providers informed about the growing data demand over the nbn as more Australians continue to adhere to social distancing measures.

“Access to secure and resilient broadband is more important than ever for Australia’s business, education and entertainment needs and NBN Co seeks to support Australians during this time.

“As more people start to work and learn from home, we’ve seen a substantial increase in the peak throughput on our main wholesale service during the daytime business hours, early evening and busy evening periods. And as we continue to see these increases in data demand, the network continues to perform well, helping internet providers to support the internet needs of Australian homes and businesses.

“We are very pleased that the network continues to operate well in these unprecedented times and is accommodating the increased data load. It shows the nbn is well-prepared to handle Australia’s growing data demand at a time when the nation most needs high-speed, reliable broadband.”

The new metrics will be published on nbn’s Transparency dashboard at: nbn.com.au/updates