NBN Co has unveiled dramatic discounts on its top-tier internet access plans in a move that is designed to deliver significant savings for its wholesale customers and allow them to improve broadband speeds and service for end users.

The changes – which apply to the company's fixed line access network and come into effect in the second quarter of 2018 – mean that for the first time NBN Co will bundle together access and bandwidth charges for its higher speed plans under a simple pricing structure.

Previously, the static access charge and the fluid capacity charge made up a two-part pricing model that had seen some retailers under-provision bandwidth, which was impacting end user speeds during peak download times.

But these new plans – include nearly double the current average capacity being purchased by retailers across all nbn™ fixed line services today – will help entice retailers and end users to move up the speed chain, reposition the nbn™ 50 service as the company’s flagship plan and unleash the potential of the nbn™ access network.

The changes are expected to also result in significant savings for NBN Co’s wholesale customers with the new nbn™ 50 bundle representing a potential discount of 27 per cent while the nbn™ 100 bundle could save retailers 10 per cent when compared to current average prices across the industry.

Included bandwidth on these new packages is just the minimum, meaning retailers can continue to purchase additional capacity as demand increases for $8 per megabit per second per month, a 40 per cent reduction.

Until the new pricing structure goes live and to help transition retailers to the new pricing options, NBN Co is also introducing a promotion that will see the nbn™ 50 wholesale service sold for the same access price as the nbn™ 25 service with a boost of 50 per cent additional bandwidth.

While these new plans are designed to help promote the take-up of higher speeds, NBN Co has also announced plans to introduce a lower cost of entry-level  wholesale bundle to ensure retailers committed to voice-only and basic broadband access customers are not left behind.

The new voice-only and low usage access plans will come with an included 50kbps of data, which is enough to cover a basic telephony service. This means retailers servicing telephone-only and basic internet users can purchase the new nbn™12 bundle for a wholesale charge of just $22 per month, which represents a potential discount of around 8 per cent on the current entry-level plan.

NBN Co’s existing pricing options will continue to be available for internet and phone providers who prefer this model and to also allow a smooth migration for those who choose to progressively move their customers over to the new bundles.

“Today, more than 80 per cent of end users are on plans based on the nbn™ 25 wholesale speed tier or lower but we want all Australians to experience the benefits of fast broadband and the economic growth, job creation, and social inclusion that it unlocks.

“Combining access and bandwidth charges into one simple price point will not only promote the take-up of plans based on higher wholesale speed tiers and position the nbn™ 50 bundle as our flagship service, but it will also trigger the triple benefit of improved end user experiences, provide more affordable pricing options for retailers and support NBN Co’s revenues in the longer term.”

The nbn™ access network is currently available to more than one in two Australians and is scheduled to be complete by 2020.

Read more about the pricing options on the nbn blog. 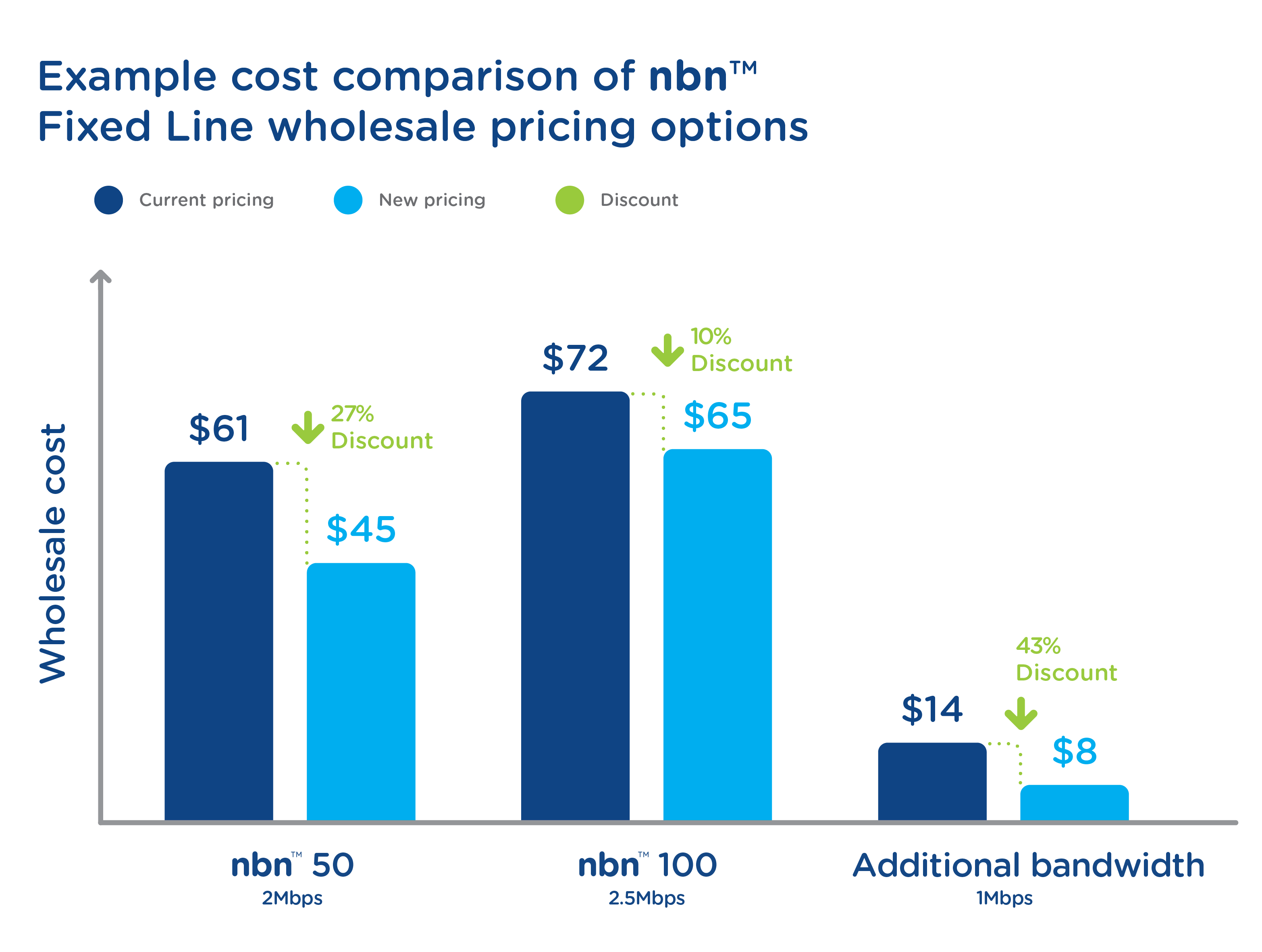