Skip to main content
Related Articles
The internet of me: personalised automation for your gadgets and apps Why the Internet of Things is set to explode More future tech trends to get excited about!

Peering into the future of connected glass: Tech around the corner

From palm-sized touchscreens to tabletops, the present and future of connected glass is looking clear.

The rise in popularity of smartphones, tablets and other touchscreen devices has led to the expansion of the logic behind the tech into other, larger areas.

One of these areas is connected glass, also sometimes called ‘smart glass’.

Connected glass acts as a giant tablet or smartphone screen that has the potential to convert traditional glass surfaces into connected touchscreen devices. 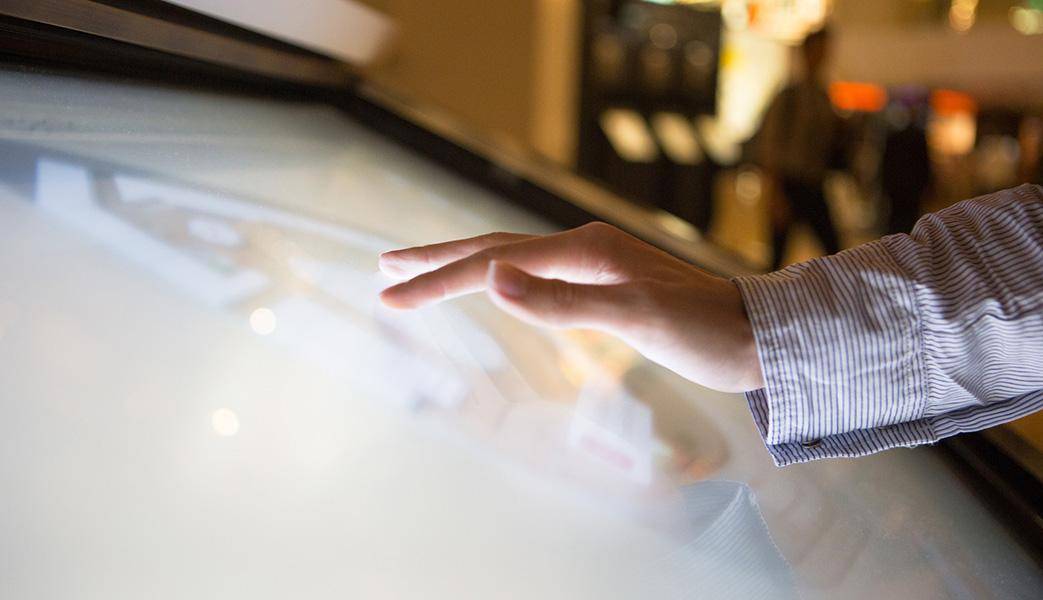 In its current form, ‘smart glass’ may refer to several applications, some of which you may have already encountered.

For instance, there’s a product called smart glass that has a display layer nestled between two sheets of glass, which allows it to be manually switched from clear to opaque.

The other common types of connected glass are predominantly commercially focused at this stage, like the ones that are used as a vertical interactive guide in shopping centres.

An extension of this logic is rolling out in the US in the form of advertising touchscreens that let people browse and order specific products.

Another kind of connected glass currently available in the States with a commercial focus is the Illuminate Multi-Touch Table. This touchscreen table bundles a computer, projector, camera and speakers into the design.

Without the table frame, the screen can be used on a counter, in a wall, or in a window via hand-tracking and gesture-recognition software.

The idea for these types of screens is to have a user-friendly multi-touch surface for interactive presentations or other touch-controlled applications.

These displays have the potential to be combined with camera technology to create virtual changing rooms, where the user is shown in the glass as wearing available digital outfits they’d like to try on. 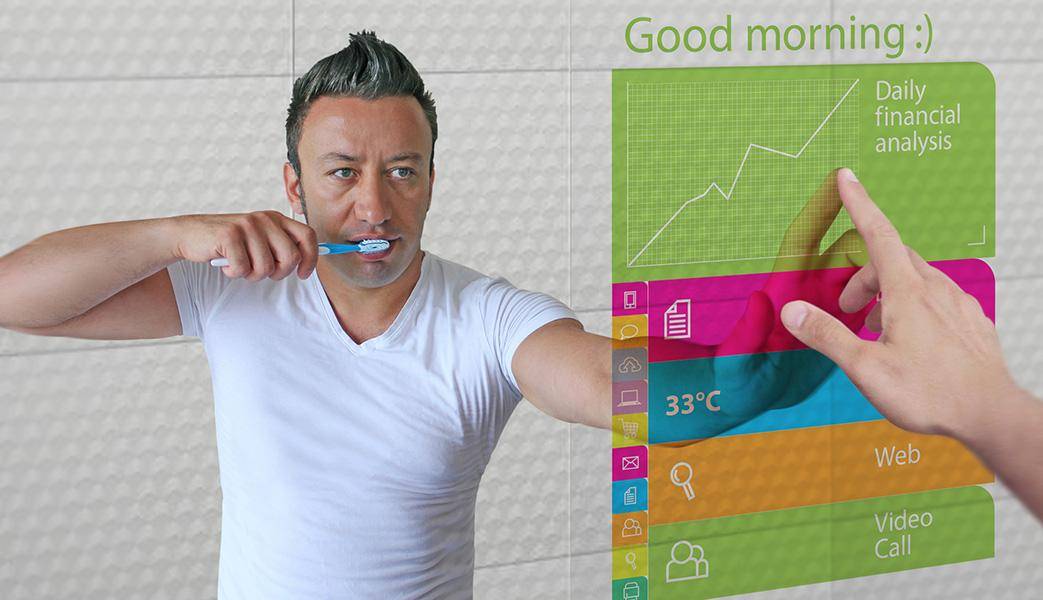 While sci-fi movies like The 6th Day made it seem like smart mirrors were just around the corner, this kind of connected glass isn’t yet readily available.

One consumer product disappeared from the market, and several crowdfunded attempts fizzled out.

Currently, there are simpler instances of smart mirrors that don’t have interactive touchscreens.

Up until recently, connected mirrors that feature voice-control, on-screen notifications, and/or touch input have been relegated to DIY custom builds from tech enthusiasts.

A recent successfully crowdfunded home model, the Perseus, can be personalised to display notifications on the glass; take pictures with an HD camera; stream video; and display weather, news, traffic and calendar items.

The Perseus is currently available for pre-order in the US only, as is the VanityVision smart mirror, which has a modular design so people can use add-ons to enable voice recognition, gesture controls, and/or touch capacity.

The VanityVision is a two-way mirror that’s 70 per cent reflective and boasts 4K capabilities. 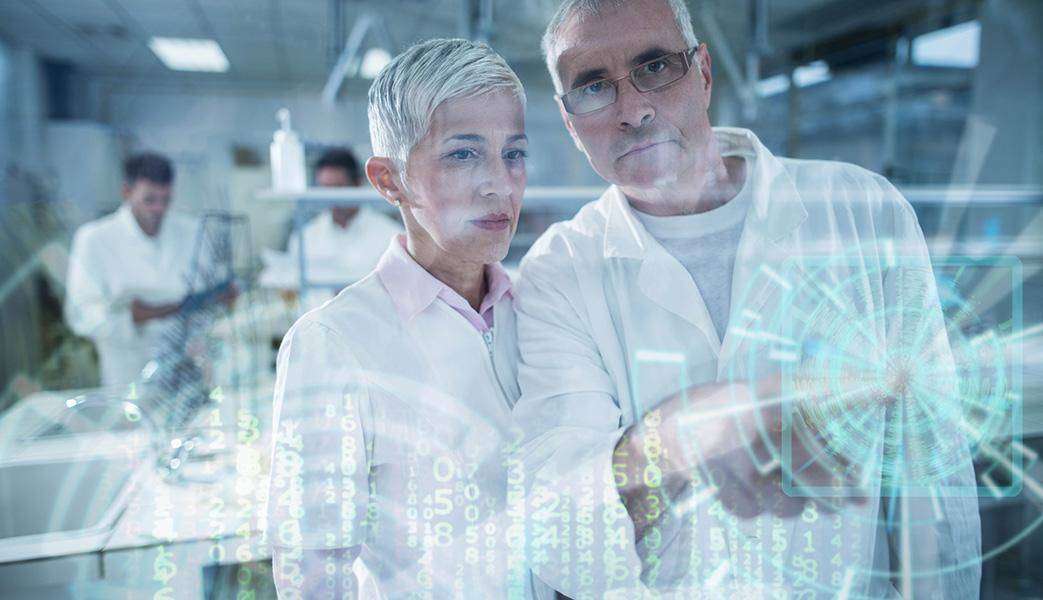 Of all the connected glass categories, connected windows look to be the one that’s the furthest away.

The five-year-old connected glass tech was usable on the CES 2012 show floor and was intended to sit over an existing window inside your home, but we're yet to see commercial application.

During the day, the smart window would use ambient light, and at night it’d switch to a black background.

Like a smartphone or tablet, it had support for widget display, which meant it could display weather, news, flight info, social networking, video, and a range of other apps.

If you were outside looking in at the smart window, you’d not able to see what was on the screen inside.

One of the novel features was a set of virtual blinds that used a digital cord to open or shut the blinds to illuminate or darken the room.

Unfortunately, the Transparent Smart Window isn’t available, and neither are alternatives which, at this stage, look to be at least a few years away.

There’s also chatter about smart windows with inbuilt heat sensors that can be configured to automatically open and close depending on the temperature and, similarly, to provide alerts when windows are left open.

The future of connected glass 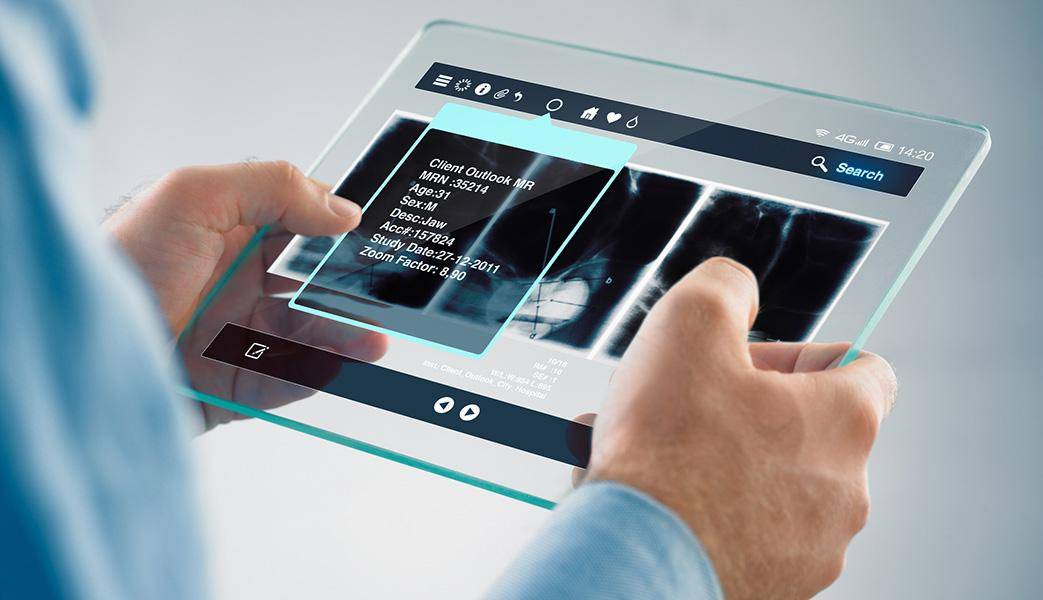 Tech giants like Samsung and LG paint a picture about the hypothetical future of display technology.

On the glass-display side of things, Samsung has theorised about a smart glass cutting board that weighs food and displays nutrition information.

There’s also an automotive window display for passenger windows in cars that displays information at the top, and allows for up/down positional and in-car climate control.

In terms of educational applications, a Blackboard Display can switch from transparent to opaque, and acts as a two-way multi-touch screen for playing educational games or giving lessons in multiple rooms (one per side) and displaying pertinent information.

It also looks like there’ll be a movement away from traditional, brittle glass and towards bendable materials to create foldable and rollable displays.

The technology for ultrathin glass that can be bent (but not folded, yet) exists, with one of the goals being flexible consumer gadgets.

This means screens will be easier to transport, and can be placed on objects that don’t traditionally have flat display areas.

This new type of glass will also reduce screen thickness and enhance durability.

Over the next few years it seems likely that connected glass will move away from a predominant commercial focus and more into the consumer space as the technology continues to advance.

There's more to the future than connected glass. Check out these must haves for the lounge room of tomorrow!