Skip to main content
Related Articles
Meeting the people behind the nbn™ network: Geoff Behind the pay equity debate Six quick tips for job seekers in the digital age

For Australian university graduates, accepting a role with one of Australia’s major companies can be the launching pad to a long-lasting and highly successful career.

To make it easier for graduates who have set their sights on working with the country’s best firms, the Australian Financial Review and graduate recruitment company GradConnection publishes the Top 100 Graduate Employers, an annual list ranking the most in-demand places to work for new graduates.

In 2017, NBN Co ranked in the top 100 Graduate Employers at 67th place. And, in 2018, the company has lifted its ranking to feature in the top 20 firms to work for in Australia. NBN Co joins major names, including the Commonwealth Bank, PwC, IBM and Accenture, to sit in 15th place overall. 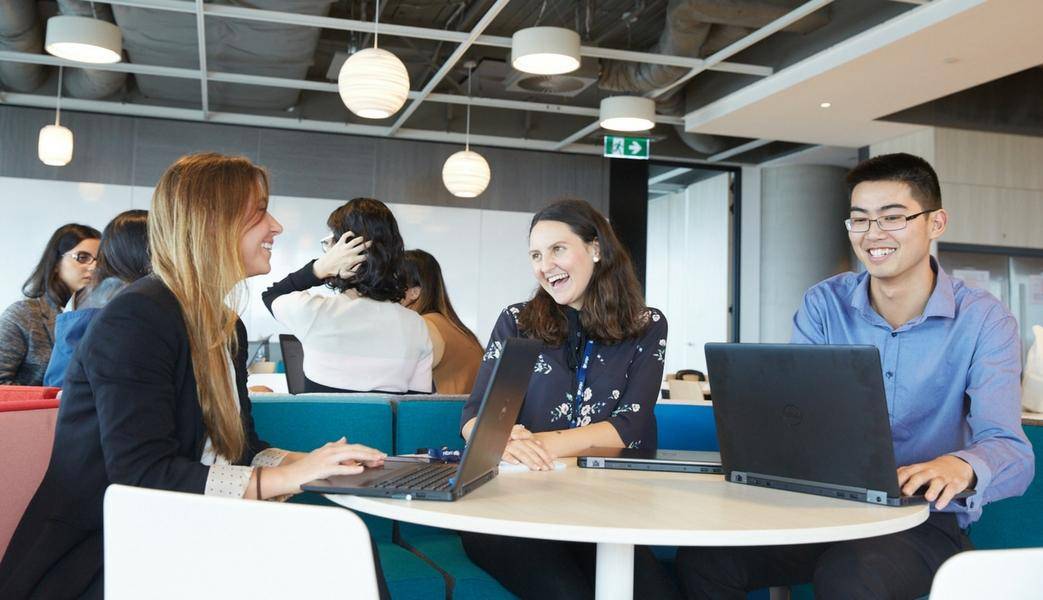 The results of this year’s list, according to AFR, demonstrate that graduates are looking for interesting work as well as established names. They are also seeking businesses undergoing rapid expansion and looking for employers that give them the opportunity to apply their knowledge related to their area of study.

This is part of the reason why NBN Co has experienced a surge in popularity among new graduates. Implementing the nbn™ broadband access network is a massive undertaking, which uses cutting-edge technology and involves many moving parts. Graduates are able to witness the evolution of a major project, while having a hands-on role in helping to bridge the digital divide.

About the NBN Co Graduate Program

NBN Co’s Graduate Program is a two-year placement that involves four, six-month rotations across the business.

According to Amy Millington, Program Manager for Talent and Performance at NBN Co, “Each rotation is individually designed with the graduate’s field of study and career interests in mind, as well as the longer term vision of the organisation. Graduates are supported through various learning and development modules recognising that they are our future leadership pipeline.”

To make the graduate experience a positive one, there’s a great deal of support on offer throughout the program. Madeleine Skinner, NBN Co’s Talent and Graduate Program Manager, explains that each graduate has a ‘champion’ from the business, a grad buddy and a mentor to help them adapt to their role.


“Joining NBN Co means having the opportunity to be part of widespread change in a new era,” says Madeleine. “The scale of the project and the use of technology and innovation are appealing to graduates on many levels.”

“We have a well-structured and supportive program that’s tailored not only to the business but to the needs and interests of the individual. The idea is to allow them to excel from the get-go,” says Madeleine.

Graduates are sometimes able to take on influential roles within the company almost from the time they enter the building. One recent example is a member of the Graduate Program who was able to play a key role in our corporate responsibility initiative enabling NBN Co employees to contribute beyond the company’s main goal of helping to bridge the digital divide. “The graduate did an amazing job,” says Amy.

This strategy of providing support and encouraging self-starters has proven successful, with around 80 per cent of graduates remaining at the business since the program began in 2014.

NBN Co received more than 2,000 applications for the 2018 program, narrowing the successful candidates down to just ten.

The selection process is rigorous and involves an online application process followed by a video interview, group assessments and face-to-face interviews.

“When recruiting, we work closely with the business to see what roles are coming up in the future, whether it be in communications, engineering or IT areas of the business,” Amy explains. 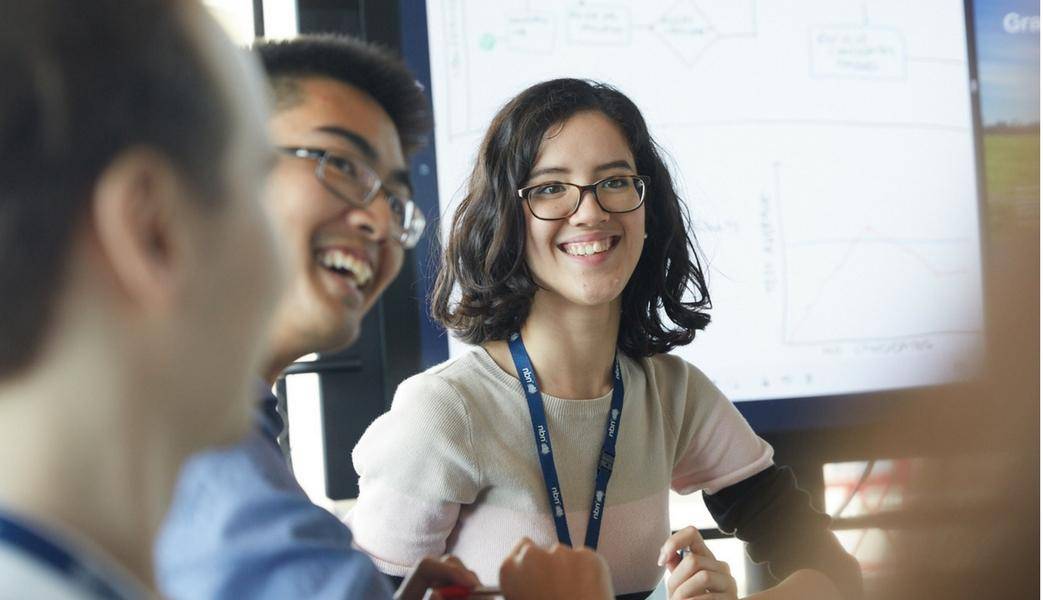 Candidates come from many different backgrounds and are selected on a range of factors beyond academic prowess. The Graduate Recruitment Team is seeking well-rounded people who have leadership capabilities and who have an interest in the broader goals of the business.

Madeleine’s recommendation to anyone thinking of applying for the NBN Co Graduate Program is to take a good look at the website, visit the blog and understand what NBN Co is all about. “As well as polishing up your CV, think about your personal values and who you want to work for,” she suggests. “Reach out, have a chat to the team here and find out how you could fit into the organisation.”

Amy adds that candidates need to be right for NBN Co but it must be ideal for them as well. Also, “when recruiting, we want to see a candidate’s authentic self as we are looking to build a diverse championship team.” 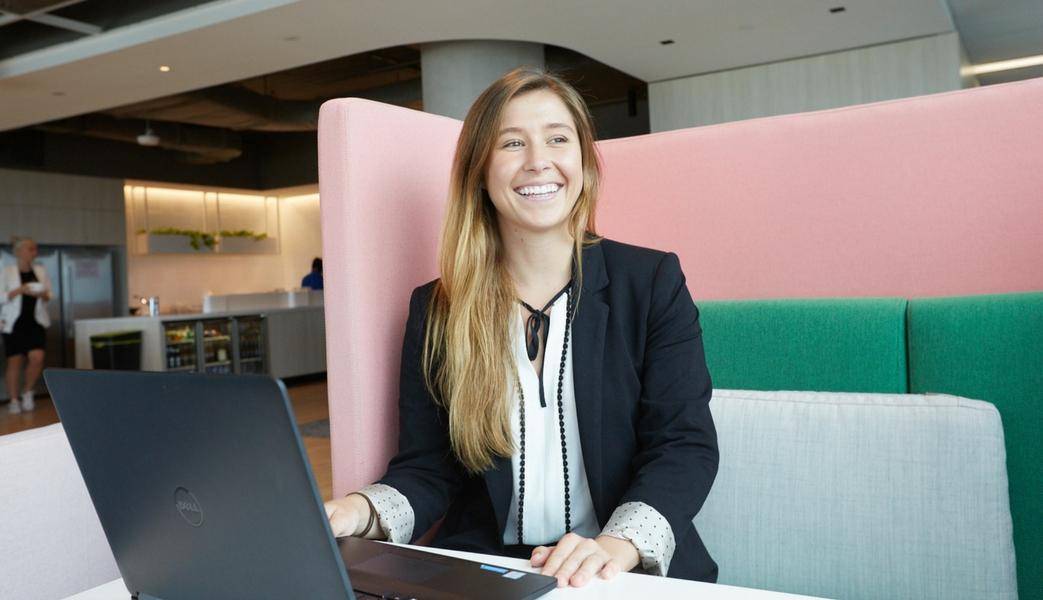 Both Amy and Madeleine agree that part of the appeal of NBN Co for graduates is the project’s national impact. The implementation of the nbn™ access network is affecting people across the country, and has social as well as economic and technological value.

“Joining NBN Co means having the opportunity to be part of widespread change in a new era,” says Madeleine. “The scale of the project and the use of technology and innovation are appealing to graduates on many levels.”

For the business, being one of the top 20 graduate choices in the country is a huge positive. “Our graduates are inspiring, committed and highly capable,” says Amy. “We are lucky to have them on the team.”