Close this message
Related Articles
How much data does streaming video, movies and TV use? (2018 edition) What are smart TVs? Movie and TV subscription services in Australia

If you think everyone is watching videos on smaller and smaller screens, think again. Some are using the rollout of the nbn™ network and the advent of Netflix and co to think BIG.

If you want a room with a view - a big entertaining view - then Mark Jeisman is your man.

While many people these days like to watch their videos on smaller and smaller screens, like a smartphone or tablet, a growing number of discerning movie fans are going the other way.

At the top end, some spend $1 million-plus on a big luxurious home theatre with screens up to 4.5 metres wide, though more modest systems can be had for around $5,000.

One thing Mr Jeisman - a big screen specialist - is sure of is that the rollout of fast internet with the nbn™ network and the advent of services like Netflix, Stan, Presto, Quickflix and Ezyflix is going to fuel the home entertainment revolution.

“People expect internet speed,” he said. “They don’t want to sit around waiting for content to buffer, so people who have the nbn are making the most of high definition movie quality.”* 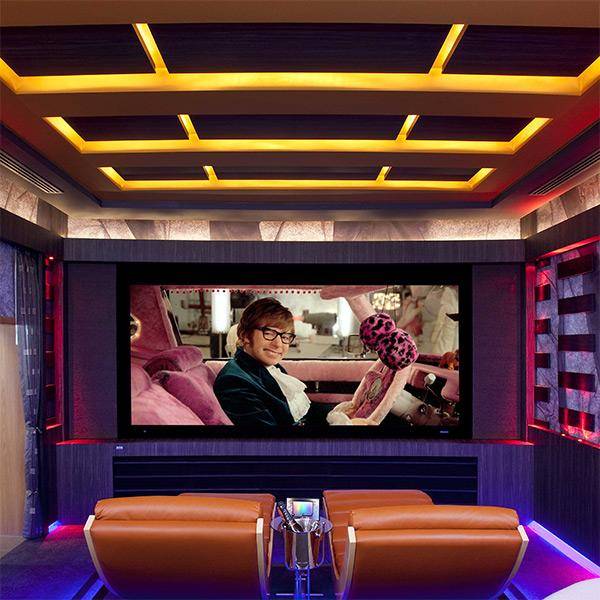 Architect Dennis Campbell, of The Drafting and Design Den in Mandurah, WA said: “Almost every new house I design has got a theatre room in it.”

And Tony Warren of The Big Picture People in Mandurah says many homes in the area have a dedicated home theatre room.

“Two rows of seats are quite popular and 3.5 metre screens so you can have a regular film night with a big screen feel,” he said.

At the top end of home theatre style is the Cinema DeLux concept, devised by Surrounds, a Perth-based company which custom-builds luxury home cinema delivers Hollywood-standard audio and visual quality as the movie’s director envisaged.

Mark Jeisman, director of Surrounds, explains: “Because of poorer internet speeds over the last 10 years or so, we’ve had our movies and music compressed. If you squash something down you affect its quality. Now because of nbn the internet speed and home networking improvement means we can deliver lossless high definition audio and movies to our homes.*

“People are starting to realise that illegal downloading has destroyed what we once knew as good quality, because the music or movies were compressed or augmented from their original. So we are finding people are understanding that if they are going to have a nice new 4K ultra definition smart TV they are going to want to put really good content through it, legitimate content.”

“As the quality gets bigger and better it puts more demand on the internet,” he says, “so that’s one of the benefits of the nbn and why we are selling to nbn areas.”

He said the aim of Cinema DeLux is to give film enthusiasts at home the best possible quality experience, using similar equipment to Hollywood.

At the top end of their bespoke service, he says “you can poke past $1 million”, while the example in Cinema Delux’s showroom (pictured) cost $300,000, including all the furnishings such as the luxury orange Spanish leather recliners.

* Mark Jeisman is referring to services over a fibre to the premises connection. Your experience including the speeds actually achieved over the nbn™ network depends on the technology over which services are delivered to your premises and some factors outside our control like your equipment quality, software, broadband plans and how your service provider designs its network.